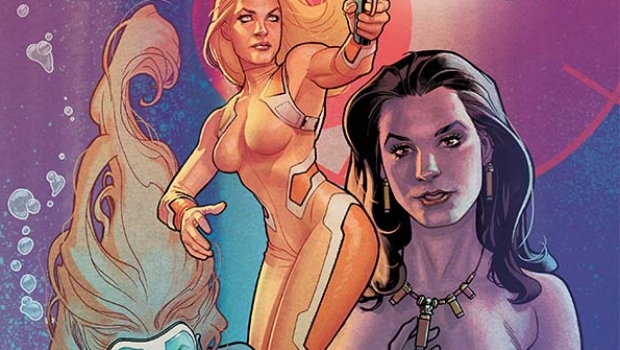 Why is Dynamite one of my favorite comic book companies? Because they help me relive my childhood! Lynda Carter (70’s Wonder Woman) Lindsay Wagoner (70’s Bionic Woman) and now the beautiful Angels of Charlie! Ladies that helped me go from puberty to adolescence are immortalized in the pages of comic books. This issue opens with our tantalizing trio posing as stewardesses as they travel TGA (Transglobal airlines) undercover. They’re trying to infiltrate a KGB agent that’s up to no good!

John Layman works Charles Townsend into this story like we’ve never seen before (don’t worry, we still can’t see his face.) He winds up being compromised at his own home. Then we cut to the next day where Charlie is giving an assignment to his Angels, leading us to wonder if he can be believed in this latest assignment. Charles Townsend may be slightly under the weather! Espionage, cover-ups and all around no good shenanigans abound as we go deeper into this intriguing story. I love good spy thriller and this one is shaping up to be an awesome tale. Great stuff includes Jill’s jealousy of Kelly as the spy they’re trying to infiltrate is more enamored with her. Also, the gunfight between the Angels and the KGB spy.

Joe Eisma is re-creating ‘70’s era classics in an exciting, and yet surprisingly modern way. I really enjoy how he brings back these icons of the feel-good decade and yet makes them vibrant and work in today’s world. Highlight’s include the angels standing, guns in hand, over the fallen agent and the title splash page.

Don’t believe everything you hear from those you think you trust. The Angels find themselves in a predicament when a certain KGB agent turns out to be something entirely different than what they were told he was. Is he a good guy? Is he a bad guy? It turns out that he…to be continued. ***1/2 (8.3 rating)