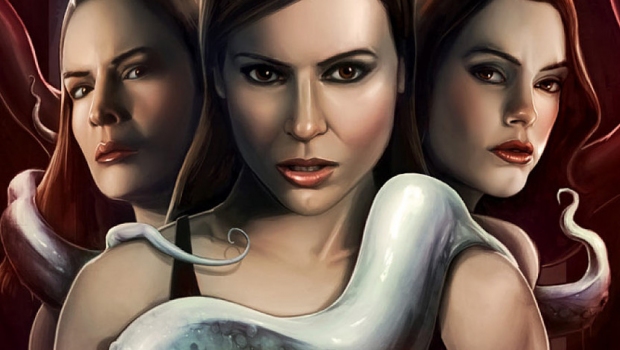 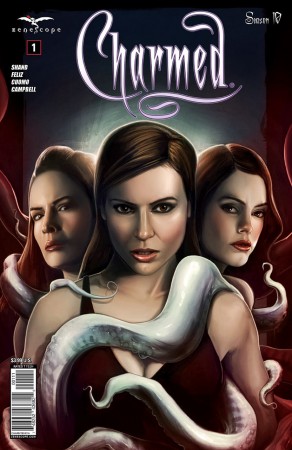 You remember Charmed, don’t you? It was the popular TV series about modern-day witches that originally starred Alyssa Milano, Holly Marie Combs, and Shannon Doherty as, respectively, Phoebe, Piper, and Prue Halliwell, then later added Rose McGowan’s Paige Matthews (when Doherty left the show) and a pre–Big Bang Theory Kaley Cuoco to the cast. Created by Constance M. Burge and powered by cleverly sarcastic writing and witty acting, the show ran for eight seasons (1998–2006) and then found renewed life when Zenescope Entertainment picked up the comic-book rights and published Charmed: Season 9 (2010–2012).

Now in 2014, Zenescope starts the series’ latest comic-book cycle with, naturally enough, Charmed: Season 10 #1.Written by Pat Shand (Grimm Fairy Tales, Robyn Hood) and illustrated by Elisa Feliz (Dallas: The Gathering), “No Country for Old Ones” starts off innocently enough with the Charmed Ones meeting a new, handsome next-door neighbor who’s stopped by to say hello, and give them pastries—except they’re eeevil pastries. And when the sisters don’t fall for that trick, the “neighbor”—in reality an Old One named Gaxageal…from Canada—decides to get more hands-on in his approach to steal the sisters’ powers…

Storywise, Shand matches the tone of the TV series and delivers a lighthearted adventure that could have easily been an episode. However, Feliz’s cartoony art doesn’t really deliver—the storytelling has very few “camera angles” to keep things moving, and if you remove the coloring, you essentially have a coloring book with a limited use of mood lighting and shadow placements. Still, some of her facial expressions have their…charms

Bottom line? Light and fun and sarcastic, just like the TV series it’s based on, Charmed: Season 10 is off to a good start and will definitely appeal to fans of the Halliwell sisters.

“No Country for Old Ones”