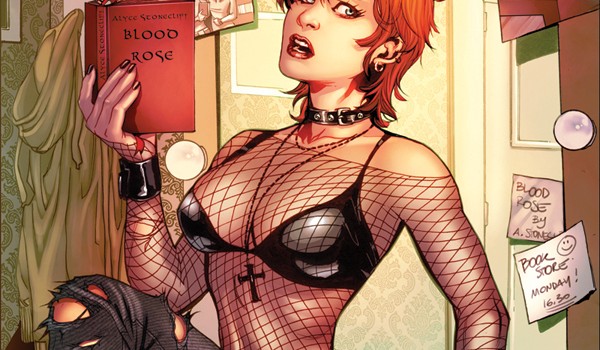 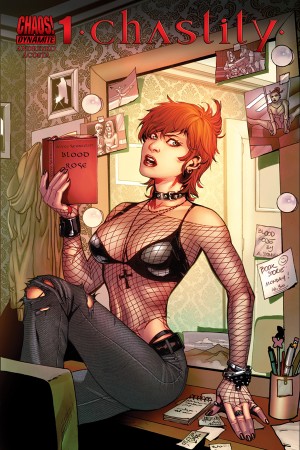 I didn’t pay much attention to the Chaos! Comics line of characters back in the 1990s. After the launch of Evil Ernie in his first miniseries (by creators Brian Pulido and Steven Hughes) and its first titles—most of them starring Ernie’s pinup-queen goddess, Lady Death—I drifted away, in general because, although Pulido’s writing style was loud and brash and evocative of the heavy metal/death metal music that so inspired him, after awhile it started to read/sound like a guitarist banging away on the same three power chords over and over again. “Subtle” was never an adjective that could be used to describe the Chaos! house style. So when the Chaos! universe branched out to include bad girls like the teen vampire Chastity, the Egyptian vampire goddess Purgatori, and others I noticed their presence on comic-shop shelves but never read them.

Still, it was sad when Chaos closed up shop in 2002. Looking past the writing problems, you couldn’t help but admire Pulido’s showman-like qualities as one of the driving forces of the indie comics industry, and he certainly had a strong following. But between the bankruptcy and the changing, politically correct market—in which bad-girl comics were now considered worse than Hitler—not even Evil Ernie could stop his ultimate demise. And so the Chaos! Comics universe was lost in publishing limbo…until Dynamite Entertainment decided to restart it in 2012. The revival began, naturally, with a reboot of Evil Ernie, followed in 2014 by the still-running (as of this writing) miniseries Chaos, which introduces new versions of Chastity and Purgatori.

And now, even before Chaos has reached its climax, we have the new Chastity #1, written by Marc Andreyko (Batwoman, Manhunter) and illustrated by Dave Acosta (Vessel of Terror, Grimm Fairy Tales Presents Tales from Oz).

Like the new Evil Ernie, Chastity #1 is a reboot of the character, with a new origin story. Here, Chastity is a teenaged Olympic gymnastics hopeful whose career is cut short by an injury. Seeking another way to occupy her time, she turns to reading and becomes enraptured by the romantic vampire series Blood Rose and its author, Alyce Stonecliff; today’s audience will immediately think of Stephanie Meyer and Twilight, but since the story is set in 1985, it’s more like Anne Rice and her Vampire Chronicles (Interview with the Vampire, et al.). And when Chastity gets an opportunity to meet Stonecliff, well, that’s when things go terribly wrong…

Andreyko, known for his strong female leads in such DC Comics series as his critically acclaimed Manhunter and his current run on Batwoman, does a good job of introducing us to Chastity and making her a sympathetic character. Other then the overused family clichés of Mom being a stage-mother stereotype—she was an Olympian who now pushes her daughter to follow her path, then casts her aside when the daughter fails—and Dad being the henpecked spouse who loves his daughter but lets his wife have the last word on everything, Andreyko makes us feel for Chastity as she tries to find a place for herself in the world now that her (read: Mom’s) Olympic dreams are over.

However, one of the things that confused me a bit was the use of the story’s time period: the 1980s. I understand that Chastity is narrating the series as a look back to her origin as a vampire. In fact, the opening caption says “New York City, 1985.” Followed by “My name is Chastity Marks. I was born seventeen years ago.” Therefore, Chastity was born in 1968 and the story (and its narration) is firmly placed in 1985. But then on page 10 you hit this:

“And when I say ‘books,’ I mean it. None of that iPad/Kindle/Nook crap kids read now.”

Followed a few panels later by: “Harry Potter is super popular and those books rocked…”

See the problem? Chastity is making contemporary cultural references…in 1985. The first iPad came out in 2010; the Kindle in 2007; the Nook in 2009. Harry Potter and the Sorcerer’s Stone was published in 1997; Harry Potter and the Deathly Hollows, the last book in the series, in 2007. So either Chastity has to have been born in 1997, in which all her cultural references would be fine; or it should have been made clear that Chastity is looking back from today at her ’80s origin; or the comic’s opening should have read along the lines of “My name is Chastity Marks. I was born in 1968…but I died in 1985, when I was seventeen. And this is how it happened…”

And yet, according to Andreyko, the comic is set in the 1980s, to reflect the original Chaos! version. As he says in the issue’s endnote: “That meant no cell phones, no Internet, no post-ironic ironic teens.” He then goes on to say “just wait ’til Chas discovers the punk rock scene and hits CBGB’s…” But then he puts glaring anachronisms in his script that even the editor overlooks. Hopefully such glitches will be avoided in future issues, because iPad and Harry Potter shout-outs in the eighties have a tendency to distract from the story.

Art-wise, Dave Acosta does a great job of bringing us into Chastity’s world, going from brightly lit scenes and open panels that depict Chastity’s soap-opera-ish life, to deep shadows and bordered panels when the horror element is introduced. And in keeping with the story’s eighties’ vibe, when an actual vampire does make its appearance, it has a look reminiscent of the undead in the cult classic film Fright Night (the original, not the remake).

Bottom line? It’s an intriguing start to the series, and Chastity Marks is a likeable character, so a reading of issue two seems in order. If you’re a fan of the old Chastity, of female vampires, of Chaos! Comics’ bad-girl characters, or of just bad girls in generals, give Chastity a try.

“Be Careful What You Wish For” 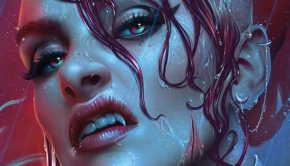 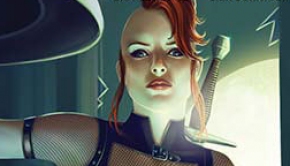