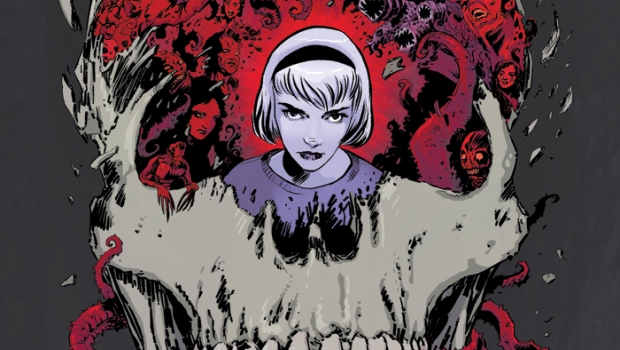 First she inadvertently unleashes a zombie apocalypse in the pages of the bestselling horror-comic series Afterlife with Archie; now she gets her own series to cause even more supernatural trouble. That Sabrina Spellman, she’s one busy teenage witch!

Chilling Adventures of Sabrina #1, written by AwA’s Roberto Aguirra-Sacasa and illustrated by Robert Hack (Moonstone’s Kolchak: The Lovecraftian Damnation), is the latest in Archie Comics’ expansion into creating edgier material than you’d find in all-ages titles like Betty & Veronica and Archie’s Funhouse. And considering the overwhelmingly positive reaction that Afterlife with Archie received (including my own rave review of AwA #6, which you can find here), it was no surprise that Sabrina would be the first to receive a spin-off title.

Except Chilling Adventures isn’t a direct spinoff of AwA; in fact, it’s not even set in the same time period. This Sabrina Spellman lives in the 1960s, in a world whose tone—in both story and art—is heavily influenced by such horror classics as Rosemary’s Baby and The Omen; her parents are a human woman and a Satan-worshipping wizard father; and her interest in a boy at her high school is already leading her down a path of dark magic. Add to that the appearance of a creature destined to become her arch-nemesis, and it’s a certainty that Sabrina’s life is not just becoming complicated, it’s becoming downright dangerous. And wait until you see this first chapter’s final page—GAAAHHH!

As a bonus feature, there’s a reprint of Sabrina’s first-ever appearance, from 1962’s Archie’s Madhouse #22, with story by George Gladir and art by Dan DeCarlo. The Sabrina presented here isn’t the girl-next-door type she evolved into over the following decades—this teenage witch has a touch of the devil in her, and enjoys it. So in a roundabout way, Aguirra-Sacasa is returning Sabrina to her original form—and only hell knows how that’ll turn out…

Bottom line? If you’re a regular reader of Afterlife with Archie, and/or a fan of 1960s and 1970s horror movies and smartly written thrillers, then Chilling Adventures of Sabrina #1 is a definite must-read. Pick up a copy today and let Sabrina work her magic on you.

“The Crucible, Chapter 1: Something Wicked”