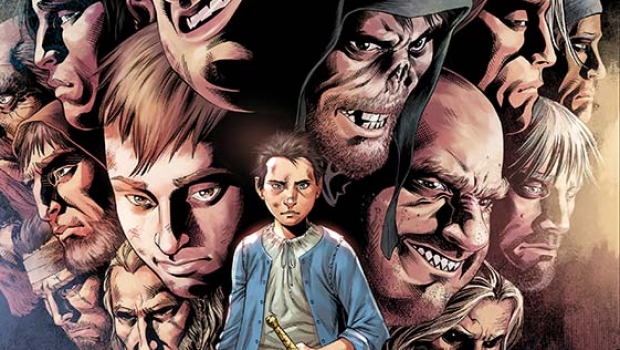 This issue opens with Arya having her hair cut and now being called a boy, Arry, by Yoren. the neighborhood kids making fun of Lumpy head (Arya) for her obscure appearance and bad haircut. She’s leaving the city in disguise and must travel with the ruffians that were making fun of her. She’s fleeing the tyranny of the new regime. 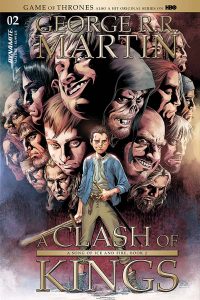 Landry Q. Walker does a respectable job in building the suspense as our antagonist must avoid contact with the authorities and is given a new identity while traveling with a bad crowd that is constantly making fun of her, though they think she’s another one of the boys and don’t hold back on their mockery. She fights back and proves her worth when the overweight kid accuses her of carrying a fake sword and tells her that she probably doesn’t know how to use it. Then we cut to Prince Bran. Bran tries to avoid sleep and he’s told that everyone must sleep even Princes, but he has terrifying, realistic dreams that prevent him from getting a good night’s sleep. The story progresses smoothly as we see how the different characters act and react with the reality of the situation they find themselves in. I enjoyed the build up towards the end of this issue and it truly leaves you wanting more. A great comic to be sure.

Mel Ruby bring picturesque life to the characters that Martin has created and you can feel the tension mount in the characters as he captures their expressions at key moments. The drawings are very realistic and he does a sensational job of taking us back to the medieval age. The jousting contest before the boy king is a highlight and helps move the story along. Great stuff.

I think George R. R. Martin fans will enjoy this adaptation of his work. It is a worthy addition to any Martin fans library. The Kingship is being challenged by several and the land is in chaos because of the King’s death in the previous issue. Where will loyalties lie and who will finally claim the throne. There is no shortage of speculation on who is worthy. But, alas, we will have to wait to find the answer. To be continued…