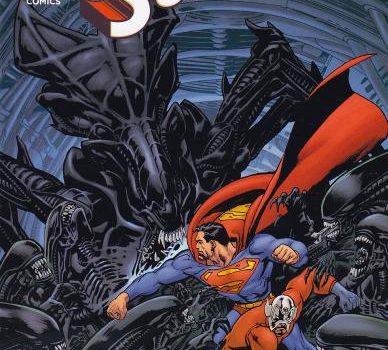 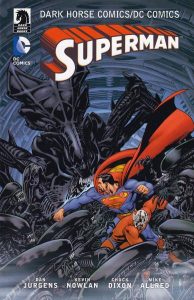 Here is an impressive collection of Dark Horse team up with DC comics Superman. The first story is Superman V Aliens and it’s a solid winner. The refreshing thing about the story is that we don’t have to see the Aliens hatching for the first time as in most Alien stories. We already know how it happens so we don’t have to see it again. Action all the way with some surprising twists. Dan Jurgens and Kevin Nowlan bring us by far the best story in this collection as we see a Superman who finds someone on a distant planet that resembles his own plight and even speaks Kryptonian. He has many human friends but never feels fully at home on Earth. The young lady he meets seems to be from his home world. The climax is a heartbreaking and we see a side of Superman we’ve never seen.

The next story is Superman V Aliens God War. Darkseid is once again up to no good as he has nefarious plans of destruction using the Xenomorph’s. The abomination allows a ship to crash, not in its designated area but on the populated planet Armagetto. Meanwhile Superman is enjoying something of a vacation on New Genesis. A vacation that will be cut short. Chuck Dixon and Jon Bogdanov bring Superman back to the world of Aliens in a winner takes all Sci-Fi extravaganza featuring DC’s baddest ass villain Darkseid. Action galore and great visuals make this one a winner.

The third offering is The Superman/Madman Hullabaloo. The beginning of this story delivers a lot of exposition to the background of Madman. He is the champion of Snap City, just like Superman is the champion of Metropolis. The hero of Snap City boards an experimental rocket that propels him into another dimension, Superman’s dimension. This results in a collision which creates a fusion; Superman and Madman morph and become two separate beings. Mike Allred handles the story and art well. The whole thing feels like a comic from the Golden age. Anyone that enjoys old style comics will find this a lot of fun.

And finally Chuck Dixon and Carlos Meglia bring us Superman/Tarzan Sons of the Jungle. At one time this story could have been handled solely by DC, since they used to own both of these properties. The story begins with a ship called the Fuwalda which is anchored off of Africa’s shores when a mutiny begins. A band of pirates takes over the ship, which includes Lord Greystoke and his pregnant wife. Meanwhile the infant Kal-El lands among Kerchak and the apes and is named Argo-Zan. Argo-Zan becomes lord of the Jungle while, Lord Greystoke makes his way back to England and of course the two will meet up later. The art is a cross between Joe Kubert and a Saturday morning cartoon. The story is well paced and the art helps it flow and bring us interesting visuals, especially the apes.

Superman and one of the planet’s inhabitants from the first story are taking on hordes of Aliens. A cover that speaks to fans of both series as the Xenomorph’s are giving all they got to the man of steel. A great cover that will catch the eye of not just fans of the two series but curiosity seekers as well. ****