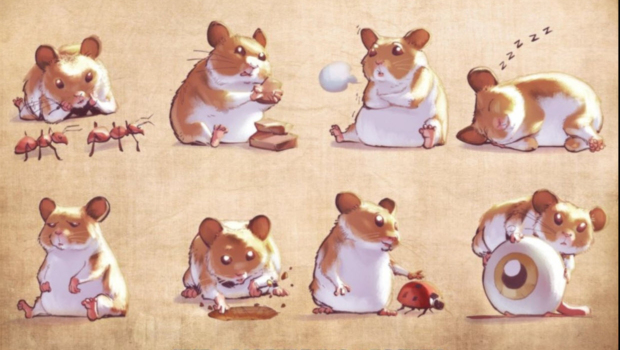 Just as effectively as a disintegrate spell, issue #5 of Dungeons & Dragons: Evil at Baldur‚Äôs Gate obliterated any lingering doubt we might have had that Boo, Minsc‚Äôs furry companion, was a ferocious, miniature space hamster.

It‚Äôs not that we did not believe Minsc every time he reminded us that Boo was actually a giant miniature space hamster; it‚Äôs just that we‚Äôd more readily believe Minsc had his brains scrambled by a mind flayer. Then issue #5 starring Boo in his first solo adventure came out, and we are now taking Minsc‚Äôs constant bragging about his hamster companion‚Äôs prowess and intelligence way more seriously.

First off, the cover, which depicts Boo frolicking in various situations, is somewhat misleading because, while the book does dish out some cuteness, it‚Äôs mostly choke full of hamster ferociousness. I always love animal-centric stories, but then, let‚Äôs not forget that this is also Dungeons & Dragons, and that the cuteness will also be accompanied by some serious mayhem.

There has always been some humor mixed in with the Baldur‚Äôs Gate comic book, but this issue gives us a serious overdose of it, enough to make you want to read it at least twice. It‚Äôs hard to talk about the issue without giving away any spoilers. Let‚Äôs just say that Boo strikes out on his own one night and that havoc ensues. Most of the comedy is of the slapstick category, provided by a foursome of villains doing their best Dungeons & Dragons impression of The Three Stooges (plus one!). And it works. There is very little dialogue; the action speaks for itself.

I‚Äôve talked at length about the art and the writing on Baldur‚Äôs Gate in my reviews of the previous issues. So, I won‚Äôt have to repeat myself here. The quality is at par with what we‚Äôve come to expect from this series. Like its predecessors, this issue will make a fine addition to any D&D fan‚Äôs comic book collection. Francesco Mortarino‚Äôs art and Jordi Escuin‚Äôs colors succeed in capturing the full onslaught of an enraged space hamster. The splash page from the rooftops of Baldur‚Äôs Gate really brings the legendary city to life. If you‚Äôve read the Baldur‚Äôs Gate novels, played the video games and adventured along the streets of this city in the role-playing game, it‚Äôs quite a thrill to see Baldur‚Äôs Gate depicted so well in the pages of a comic book. It‚Äôs a very cinematic issue, as it had to be in order to properly depict the martial prowess of a fully enraged miniature giant space hamster going amok on a bunch of bad guys. It‚Äôs no easy feat to keep readers entertained over several pages of hamster biting, physical humor that would make The Three Stooges proud and overall general mayhem, but the creators acquitted themselves very well. At one point, I almost felt sorry for the bad guys. 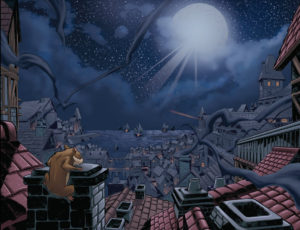 Jules-Pierre Malartre Jules-Pierre Malartre currently resides in Rigaud, Quebec, which is cold enough to save him from big-ass spiders, but as close to The Great White North that he will ever dare go. In 2005, he quit a promising aerospace engineering career to go into freelance copywriting. Since then, he has become considerably poorer, but much happier. When he is not writing technical manuals, newspaper articles or online features, he is busy working on his first novel. His first short story, ‚ÄúThe Rest Was Easy,‚Äù was published by the online literary magazine Amarillo Bay in 2013.