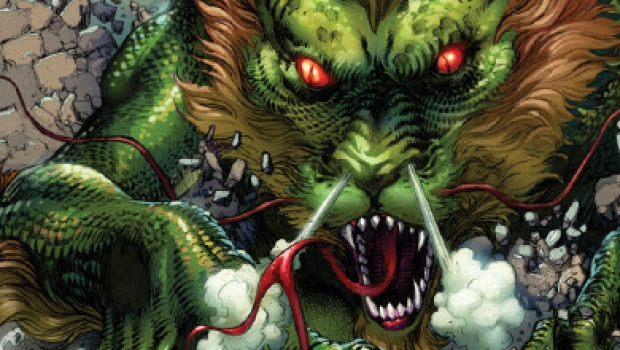 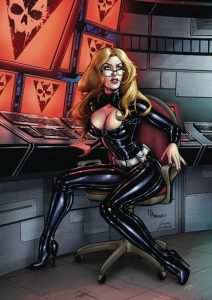 Death Force #4 picks up with Rick Murphy as a Philadelphia cop who went on the wrong case. He was killed in the line of duty. Now he has been given a second chance to avenge his death, as long as he will work for dark underground forces. He hooks up with hacker Missy Werner, who is seeking to avenge her father’s death. She learns that Mayor Devereaux is responsible and is going after him as well as helping Death Force. This issue begins with a bad ass battle between Death Force and Talon. It’s a rough and tumble action packed start as our protagonists are going for the gold.

Brusha picks up the pace for the beginning of this issue, then he has Murphy re-introduce himself to his former partner on the police force. Murphy brings him up to speed on what’s really happening instead of what the Mayor’s office and media have been telling everyone. Each issue brings out more revelations as to why officer Murphy died in the first issue. It’s edge of your seat story telling as Brusha takes his time to unravel the clues that help us to understand what happened.

Rosete does his usual great job in executing the action scenes and moving the panels along. The battle at the beginning of the issue between Death Force and Talon is a highlight as hell fire breaks through to our realm. Great scene. The way Rosete brings out the tension between the gang leader and the mayor is also drawn with an intensity that chews up the scenery. 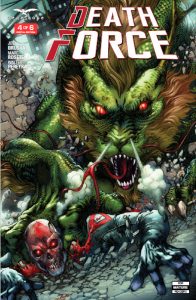 A very spirited cover, however somewhat misleading. As it doesn’t really reflect anything that goes on in this issue. A giant demon from hell is attacking our anti-hero who is on the ground trying to crawl away from the creature. The creature is green and breathing fire and has it’s claw around Death Force’s neck. It’s a great attention getter which should do the trick.

Missy doesn’t have a whole lot to do in this issue (she does get in a good shot at Talon) This one’s more about Murphy reconnecting with his old partner, Roberts. The mayor escalates his dirty tricks agenda with the gang leader, who resembles Johnny Depp in Black Mass. Missy gets another chance to shine as she leads our heroes into the thick of battle in a race that’s literally against time. She’s also literally going off the deep end when…To be continued