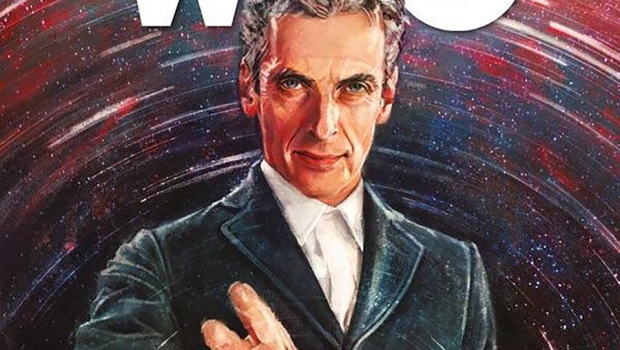 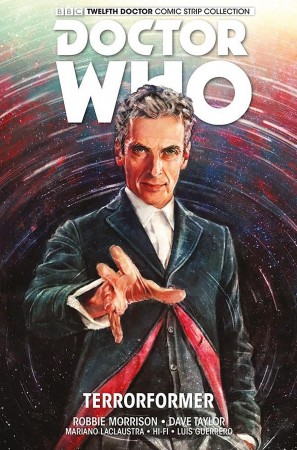 I cross the void beyond the mind

The empty space that circles time

I see where others stumble blind

To seek a truth they never find

Eternal wisdom is my guide

That opening passage from the hit UK single “Who Is the Doctor?,” recorded in 1972 by actor Jon Pertwee—highly regarded for his tenure as the Third Doctor—remains a fairly accurate thumbnail description of the immortal, body-changing time traveler who made his television debut in 1963, and who remains as popular—if not more so—these days, both on television and in the pages of his current comic-book adventures. For example:

Doctor Who: The Twelfth Doctor, Vol. 1: Terrorformer, written by Robbie Morrison (Judge Dredd, Nikolai Dante) and illustrated by Dave Taylor (Batman: Death by Design, Batman & Superman: World’s Finest), collects the first five issues and initial story arcs of the comic series starring TV’s latest iteration of the immortal time traveler, played by actor Peter Capaldi (World War Z, The Thick of It). Alongside companion Clara Oswald—played in the show by actress Jenna Coleman—the Doctor first journeys to an ice world recently terraformed into a tropical paradise by a money-obsessed developer, and then pops in to twenty-fourth-century India to investigate the death of a friend.

Storywise, Morrison does as one would hope to expect with a Doctor Who comic: create adventures that would be far beyond the budgetary restraints of the live-action series. And he does that very well. The two-part “Terrorformer” gives us the aforementioned tropical paradise and introduces us to the Hyperion, a race of sentient suns that the Doctor’s race, the Time Lords, had to put down when they became a threat to all life. Walking, talking suns laying waste to planets? Yeah, that’s a little outside the BBC’s special-effects budget. The three-part “Swords of Kali” brings a new menace: the Scindia, a family of demonlike aliens that seeks to revive their goddess, Kali.

Morrison’s one stumbling block is in his depiction of the Twelfth Doctor, whose characterization in “Terrorformer” doesn’t seem to gel with his TV counterpart; based on the comic-book Doctor’s speech pattern alone, one would think this was originally written with Matt Smith’s energetic Eleventh Doctor in mind. I can only assume that, because this comic series had to go into production while Capaldi’s first season was in the works, and no one outside of the BBC had any clue as to Twelve’s personality, Morrison had to devise his own approach to the new leading man and hope for the best. Still, it’s a small distraction in comparison to the engaging storylines, and his Doctor becomes more Capaldi-like by the time “Swords of Kali” reaches its conclusion.

As for the art, Dave Taylor brings a clean, Moebius-like quality to the sci-fi elements of “Terrorformer,” and the appropriate scary shadows to “Kali,” considering its bad guys look like monsters. His depictions of the Doctor and Clara are a little off-model, but by the time we reach “The Swords of Kali,” you can tell he’s become more comfortable in reproducing Capaldi’s and Coleman’s features. Together, he and Morrison make for a strong creative team.

As fingers move to end mankind

With sword of truth I turn to fight

The satanic powers of the night.

Is your faith before your mind?

Know me! Am I…the Doctor?