Review: Doctor Who: The Fourth Doctor #1 (of 5) - Comics for Sinners
Reviews 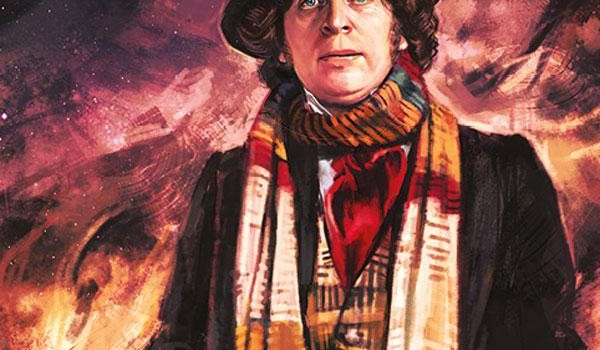 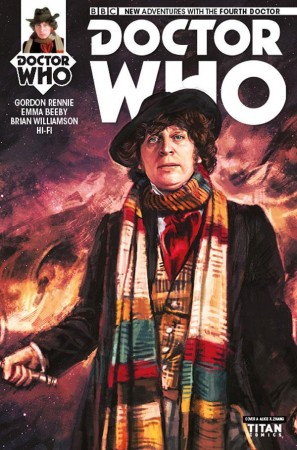 The Eleventh Doctor rose to meet the newcomer. The features were older, the hair shorter and turned completely white, but the nose was still hawkish, the smile still playful—a hint of the all-teeth-and-dark-curls look he once sported in a younger body. And though the long coat and multicolored scarf had been replaced with a more reserved tweed suit, the Doctor still recognized him.

“I know you don’t,” said the Curator with a knowing smile. “And in years to come, you might find yourself revisiting a few—but just the old favorites, eh?”

And with that exchange in 2013’s The Day of the Doctor, the fiftieth anniversary special of the long-running British sci-fi TV series Doctor Who, twenty-first-century fans of the show—or “NuWho,” as it colloquially became known after the series’ relaunch in 2005—were introduced to actor Tom Baker. But it wasn’t his role as “the Curator” that old-school DW fans knew him for, but for his seven-year run in the 1970s and ’80s as the Fourth Doctor, which is still regarded by many fans as the quintessential version of the famous time traveler.

As expected, growing interest in the Fourth Doctor immediately followed that special, and so it was only a matter of…er, time before Titan Comics—publisher of the well-received line of DW comics starring Doctors 8 through 12—got around to revisiting possibly the most favorite of “old favorites.”

Which brings us to Doctor Who: The Fourth Doctor #1, written by Gordon Rennie (2000 AD, Judge Dredd Megazine) and Emma Beeby (2000 AD), and illustrated by Brian Williamson (Torchwood, Doctor Who: The Twelfth Doctor). Here we find Baker’s Doctor matched up with his most popular traveling companion: journalist Sarah Jane Smith, whose portrayal by actress Elisabeth Sladen made her so well loved by fans over the decades that Sarah Jane not only returned to Doctor Who in the 2006 episode “School Reunion,” but was then given her own spin-off series, The Sarah Jane Adventures, which ran for four and a half seasons, until Sladen’s death in 2011. This time around, the Doctor and Sarah Jane are visiting late-nineteenth-century London, to take in Buffalo Bill’s Wild West show. As expected, their fun is cut short by an alien threat, this one in the form of hulking Scryclposes whose leader, Lady Carstairs, takes an interest in Sarah Jane—because of the journalist’s involvement in a temporal mystery…

Storywise, Rennie and Beeby do a fine job, giving us a story that could have easily fit into the television series (although the Sryclopses would have been scaled back in size to accommodate the show’s notorious low budgets). The Doctor and Sarah Jane are both well within character, and the adventure they’re plunged into moves at a quick clip, with an intriguing cliffhanger—and no doubt a “timey-wimey” solution involved to wrap it up.

Artwise, Williamson barely gives the reader time to pause—and that’s a good thing. His “camera” always seems to be in motion, from extreme close-ups to wide-angle shots, which keeps the story in constant motion, even when a scene just involves characters sitting and conversing. His use of light and shadow presents a proper Victorian Era mystery feel, and his likenesses of Baker and Sladen are mostly spot-on perfect (although Sladen’s face sometimes slips off-model).

Bottom line? Titan launches yet another successful comics adaptation of a popular Doctor—in this case, the most popular Doctor in the series’ history—with a Victorian adventure that should definitely appeal not just to longtime Whovians, but to “NuWho” fans just discovering the quirkiness of Baker’s Doctor. Go give it a read.

Doctor Who: The Fourth Doctor #1