Review: Doctor Who: The Fourth Doctor #4 - Comics for Sinners
Reviews 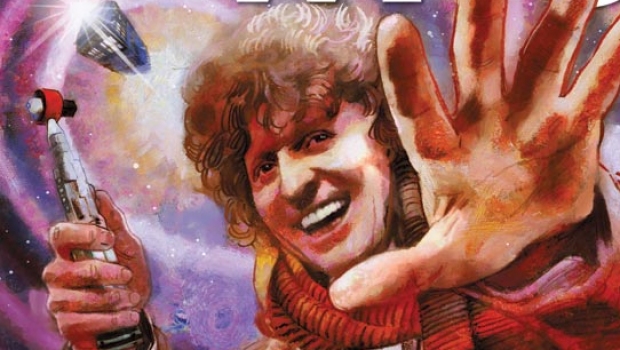 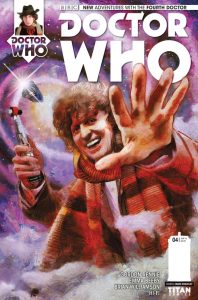 The first Doctor I watched in my life was Tom Baker and he’s still my favorite. So it’s only natural that, when a slew of Dr. Who comics comes out, I would choose the fourth doctor’s exploits to review. Once again, thanks to comic books, I can relive fond memories from my past. Oh I know the Doctor still exists, but, though his exploits are still well done, it’s just not the same thing. Having said that we are brought into a world where the Doctor winds up in ancient Greece and meets up with creatures of Greek legend including Medusa and Cyclops. Professor Odysseyus James and Sarah Jane have become trapped in history. Sarah Jane has been turned to stone by the Gorgon Medusa. The doctor and his friends, including the professor’s daughter, are now on a rescue mission to save her.

Rennie and Beeby have a flair for the fourth doctor and I feel that they were fans when the show was originally on the air (If not, they did a good job of playing catch up.) Tom Bakers attitude and cheery demeanor shine forth in this tale as he embarks on another rescue mission. After the doctor deduces the time period that they’re in, Athena notes all of the notable happenings that are going on during this time like Herodotus recording history for the first time and the great tragedies being performed in theatres for the first time. She sighs that she thought it would be a more exciting mission than what they were on. A perfect mix of humor and drama in this exciting tale.
Brian Williamson helps recreate the Tom Baker doctor complete with facial expressions and mannerisms that so resemble the actor that his personality jumps off of every page. His art is so spot on you can almost hear the original actors’ voices when reading. The magic from the original BBC productions is captured vividly and this time there’s no TV Producer around to erase the tape to be used in recording another show! It’s preserved for another generation.

There are several to choose from. My favorite is the one which shows the Doctor smiling with his left hand in front of his face and the sonic screwdriver is in his right. He’s standing in a cloud formation that turns into a galaxy as it floats into the back drop. The TARDIS can also be seen behind the good doctor as it seems to be disappearing into the galaxy. This lets the comic store surfer who may have never heard of Doctor Who know that he’s a character with immense reach throughout the galaxy. The playful smile tells the potential buyer that they’re in for a fun ride no matter what the plot. Brilliant.

Fine writing and art work give us a well-crafted chapter in this latest story featuring the fourth doctor. Fans of Greek mythology I believe will enjoy the takes on some of the legends depicted here, including a Medusa that is terrifying and unlike any other depicted in the visual media, including Movies, Comics and Television. Open to the first page, sit back, relax and enjoy the magic!

Doctor Who: The Fourth Doctor #4