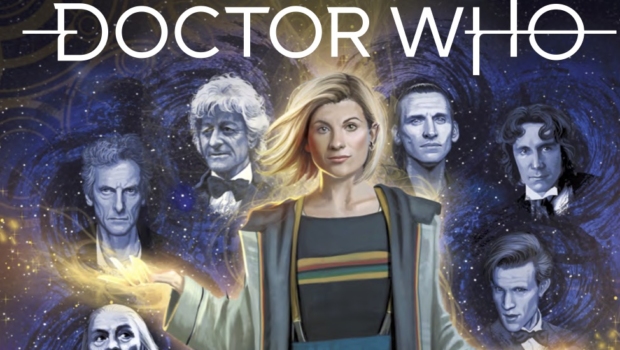 Where to begin? Sixty-nine pages of Doctor Who, 13 (or is that 14?) doctors, too many different artists to count them – all tantalizingly jammed between two covers and released mere weeks before the premiere of the new Doctor Who season starring Jodi Whittaker in the titular role… It’s an exciting time to be a fan of the Time Lord and this comic book is something of an appetizer for things to come.

I confess, I hardly ever read Doctor Who comic books. I have difficulties reading comic books based on movie or television franchises (with the exception of Star Wars and Battlestar Galactica), because those books usually don’t live up to my idealized vision of my favorite franchises. I tried again somewhat recently with X-Files Season 10, only because issue #2 featured the Lone Gunmen (I’m a big LG groupie). I also made an exception for this book because it gave us a much-needed peek at the new Doctor portrayed by Jodi Whittaker.

I assumed from the get-go that we would not get to see the new Doctor much at all in this book – the BBC has only given us a few glimpses of Whittaker as the Doctor in the form of pictures and a way-too-short preview, but this was not a book about the next Doctor. It was very much a book about all the previous Doctors, and I welcomed those new vignettes into the lives of all previous incarnations of the Time Lord.

Of course, this is an anthology book and the premise for bringing together those short stories starring all of the previous doctors is a pretty effective one: as the saying goes, when we experience a near-death experience, we “see our life flash in front of our eyes.” And as far as the Doctor goes, that’s a LOT of lives flashing in front of the Doctor’s eyes every time he/she regenerates. So, we are treated to quick tidbits from all previous incarnations of the Doctor. Great setup. There’s something in there for all Doctor Who fans, regardless which Doctor is your favorite. I like to think that even people who don’t know anything about Doctor Who would also appreciate this book, and it would serve as a good primer.

I could talk at length about the art, but then I’d have to say a little something about every single artist who contributed to do them justice. Overall, this is a very well-curated collection of short stories. Brian Williamson’s art for Jon Pertwee’s third Doctor was the one that plunged me back most effectively into the world of the Doctor. Enrica Eren Angliolini’s art for the overarching Jodi Whittaker arc captured the new Doctor very well. Uncharacteristically for me since I openly dislike a more cartoonish approach to comic books, I quite enjoyed the Fourth Doctor’s story. Don’t get me wrong, I think cartoons are great, but I don’t like the style being applied to superheroes, sci-fi or action franchises. When I feel like reading cartoons, I usually pick up a Garfield or Calvin & Hobbes trade. In this case though, I quite enjoyed the cartoonish take on Tom Baker’s Doctor, probably because he is my all-time fav Doctor.

I also welcomed the story featuring the tenth doctor, because it is one of the rate occasions we get to “see” Christopher Eccleston’s Doctor (or his likeness) in any form since he’s adamantly refused to have anything to do with the franchise ever again. I liked him almost as much as Baker, and it is great to see this story capture his likeness in a new Doctor Who story.

Richard Dinnick faced the monumental task of writing all those segments and cementing them together with the Whittaker overarching storyline. He acquitted himself very well. These may be separate stories, but writing stories about all these Doctors and putting them together in the same book is as monumental a task as developing over a dozen characters of the same ensemble cast and breathing enough life in every one to make them seem alive and believable. His work made me discover new things about some of the Doctors I did not know very well.

Doctor Who – The Thirteenth Doctor: The Many Lives of Doctor Who