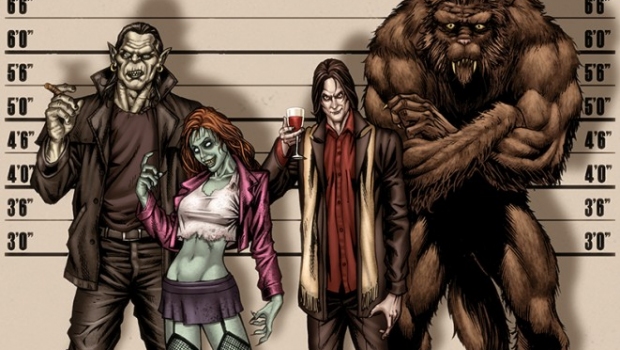 Monster Island. The name immediately calls to mind images of the home of Godzilla, Mothra, Rodan, and many other kaiju that stomp through Toho Studios’ giant-monster-movie universe. It’s the place they hang out after a heavy week of flattening Tokyo and other Japanese cities, and the one Pacific island you don’t want go near…unless you have to.

This same attitude is taken in Escape From Monster Island #1, written by Joe Tyler (Masumi: Blades of Sin, Grimm Fairy Tales: Beauty & The Beast), illustrated by Carlos Granda (Pirouette, Grimm Fairy Tales: The Jungle Book), and published by Zenescope Entertainment. It has nothing to do with the Toho-verse—in fact, “Monster Island” has become a fairly common name for similar locations in horror fiction—but it is still a very bad place to visit. Only a madman or a mercenary would willingly go to Monster Island (real name: Masi Island), and you’ll find both in the start of this six-issue miniseries.

In a nutshell, the premise is that in 2012 a U.S. research facility designed to collect and study monsters of every shape and size, from kaiju to elves, had to be abandoned when the inmates broke loose. In 2017, the government decides to send in a team of mercenaries to recover the research material that got left. They have forty-eight hours to do this, before the forcefield that contains the monsters finally burns out, at which point U.S. forces will swoop in to blow up the island. Guided by the tough-and-beautiful Doctor Bennett—a former member of the island’s research team—the mercs set out to complete their impossible mission.

At face value, Tyler’s script for Monster Island appears to be the Space Marines from James Cameron’s Aliens starring in a mash-up of two well-known genre films: the John Carpenter/Kurt Russell ’80s classic Escape From New York, in which the island of Manhattan has been turned into a maximum security prison, and master criminal Snake Plissken is “recruited” by the U.S. government to go in and rescue the President and/or retrieve the highly valuable contents of the briefcase he’s carrying; and the Josh Whedon–produced Cabin in the Woods, whose story-within-a-story reveals a hidden facility in which every conceivable monster of folklore and urban legend has been imprisoned. In Monster Island, everyone is a hard-ass exchanging tough-guy dialogue and sarcastic jibes, with little characterization. Then again, it’s the first issue in a six-part storyline, so no doubt there will be opportunities to get to know the cast better as they journey across the island. I will say, though, that the approach works when viewed through the lens of Tyler as the screenwriter of a big-budget movie—the focus is on the action and the monsters, as one would expect.

As for the art, my first introduction to Granda’s eye-catching imagery was in the pages of Black Mask’s canceled-in-mid-publication miniseries Pirouette (and whatever happened to the trade collection of that?), where he impressed me with a style reminiscent of Angel Medina. Monster Island doesn’t quite have the attention to detail and mood that he brought to Pirouette, but that probably just goes to show that Granda can shape-shift his art style depending on the project—after all, the plot here is action-movie-oriented, not Ray Bradbury-esque horror.

Bottom line? Fast-paced writing and great art make this movie-on-paper worth checking out. If you enjoyed Pacific Rim and the latest Godzilla movie, or are just a fan of big-ass monsters in general, then take a trip to Monster Island. A warning, though: it might be a one-way trip…