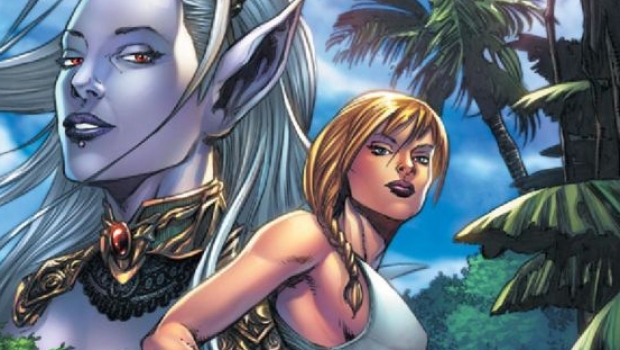 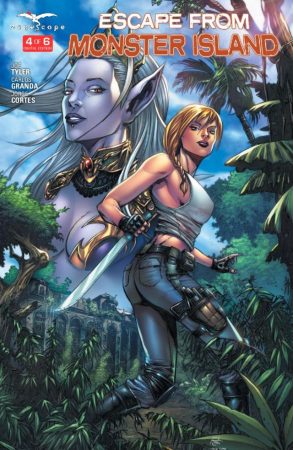 For those not familiar with Escape from Monster Island let me catch you up. The monsters are real and your government doesn’t want you to know about them. The powers that be had built an island to transport these alien type beings to and study them. A major catastrophe hit the island in 2012 and it had to be abandoned.

Xorn’s race of militants have a major hatred for the Elf Queen and tensions run high between the two races. The mercenaries who clashed with Xorn wound up bonding with him because of their mutual disdain for the aforementioned Elf Queen. For this reason Xorn agrees, reluctantly, to help Kelsey and Charles find what they need. But the mercenaries don’t realize that they are headed for an ambush.

This issue opens with Kelsey in a heated argument with her superior over the previous issues events. When we pan back we realize that they are in a cage, prisoners of Xorn. He reveals that he is no longer the leader of the Blue Skinned creatures but was a few years ago. General Chase exiled the entire blue skinned race to that island and Xorn has to prove his allegiance to his people once again.

The big thrill for me with this series is in it’s obvious nod to the world of Ray Harryhausen. Joe Tyler has given us a great cast of characters not just comic book caricatures. Each one has their own individual goals and aspirations. Xorn’s people aren’t just stereotypical bad guys. They’re a race contemptuous of human beings because they have been pushed to their limit by human interference. So naturally they aren’t going to be trusting of Kelsey and Charles. Who are the heroes here and who are the villains. It’s not that cut and dry.

Carlos Granda has brought back old memories with his artistic style, It’s definitely modern but he draws his Island creatures in the style of Ray Harryhausen. I especially loved the Cyclops. There is a sense of urgency and determination to each character as the different races on the island try to fight the other’s to a stand still. His strength’s in such titles as The Jungle Book and Lords of the Jungle have always been lush environments and commanding Safari type scenes and he brings that talent to this title ten fold.

A beautiful cover once again highlights Granda’s strengths as we see Kelsey poised for battle against a luscious jungle backdrop with the ruins of a gated city peering out of the brush. She’s wielding a machete and a look that says she means business on her face. The Elf queen is silhouetted in the clouds.

The conclusion to this issue sees a full frontal assault on this topsy turvy Isle As all sides are seeking control over the island and it’s inhabitants. And the final splash reveals yet another Ray Harryhausen type creature and the promise of bigger thrills in the next issue.