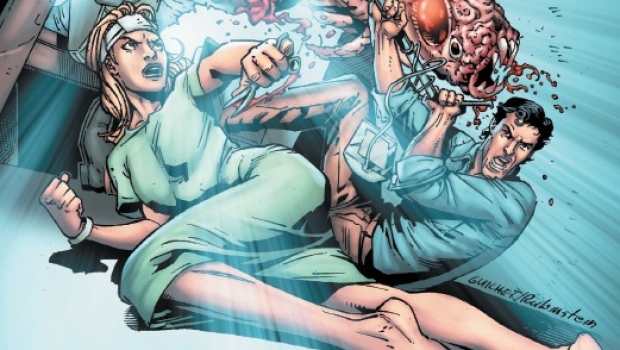 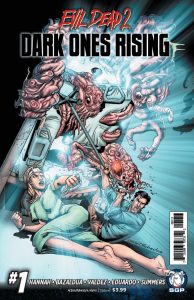 It’s the Halloween season, and there’s no one better to celebrate it with than Ashley “Ash” Williams, the chain-saw-wielding, shotgun-blasting deadite killer, star of the Evil Dead and Army of Darkness films and cable-TV sensation Ash vs. Evil Dead, and lead character in new Ash-related comics from Space Goat Productions.

Before we begin, an explanation is in order, for the ED fans out there who might be confused by the comic’s title. Since Space Goat has the rights solely to the movie Evil Dead 2 and not Evil Dead (whose rights are over at Dark Horse Comics) or Army of Darkness (those are held by Dynamite Entertainment); and since, as you might remember, Ash was sucked into a time portal that dumped him in 13th-century England at the end of ED2, which led to the events of Army of Darkness, the Space Goat Ashley Williams is a mystical clone created from the hand he severed in ED2. (This process was covered in Space Goat’s initial miniseries, Evil Dead 2: Beyond Dead by Dawn.) In this manner, Space Goat has been able to craft an ever-growing number of new adventures for Ash, without conflicting with film continuity.

With that out of the way… 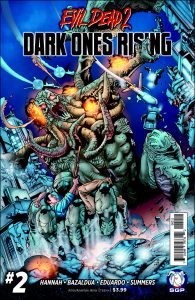 In it, Clone Ash reunites with Annie Knowby, the woman who created him, in order to stop the coming of Lovecraftian monsters set on destroying the planet. Well, maybe not stop, given that in the first issue one of them rises from deep beneath the earth right in front of them, after it’s wiped out a small town and absorbed the residents into its immense Elder God-body—and when issue 2 opens, more Dark Ones have already laid waste to parts of North and South Carolina. But with the help of a New Orleans voodoo priestess, maybe Ash and Annie have a chance to launch a successful counterattack—unless Ash’s machismo screws it up, of course…

Using the same approach that he took in Evil Dead 2: Beyond Dead by Dawn, Hannah makes Annie the lead character and narrator of this adventure, with Ash providing comedic backup. It’s a smart choice, given how well established and well-known Ash’s character has become through the efforts of actor Bruce Campbell and director Sam Raimi; it allows the reader to get to know Annie better. It also allows her to play “straight man” to Ash, whose sarcastic one-liners always work better when he has someone to play them off of.

Artwise, Hannah’s Beyond Dead by Dawn partner Bazaldua sticks around for only part of issue 1, before the pencil chores for the miniseries are taken over by Valdes, but the transition is a smooth one, no doubt thanks to Eduardo’s inks. Altogether, they bring this fast-paced adventure to four-color life, while still being able to keep Ash looking like Campbell (not always an easy task for artists of licensed comics).

Bottom line? Ash versus Elder Gods? It’s a surprise this kind of story hasn’t happened before, but it’s one that fans of both the Evil Dead franchise and writer H. P. Lovecraft’s Cthulhu Mythos might enjoy. Give it a try.