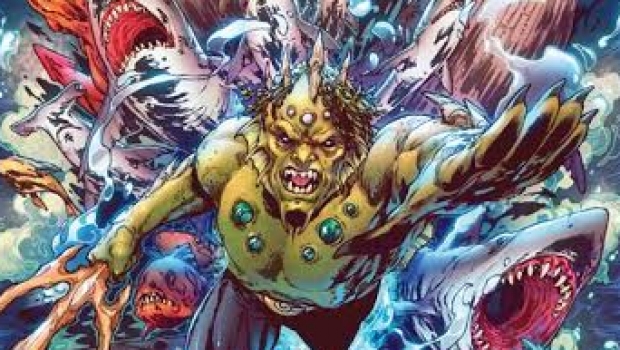 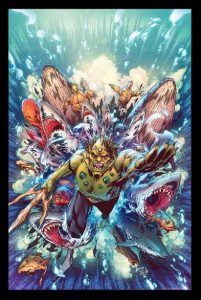 This is an action packed issue all the way. The New gods rampage continues with no opposition seemingly in sight. In the beginning of this issue Chaos unleashes a giant octopus on the powerless mortals. There’s also a great white shark. This worlds version of a super speedster interrupts the killing by chaos to save the hapless mortals. a great beginning to this chapter. Beth’s grandpa made a deal with the New gods, saving their lives. This causes friction between Beth and her grandfather. Tension is mounting among the resistance.

Joe Brusha has been doing a good job over the last five issues in showing us a collective team. His chaos seems to want nothing but taking over and destroying the earth which so far makes him kind of two dimensional but the other heroes have been split over their allegiances and the goal of their mission. Brusha has the resistance slowly discover the strengths and weaknesses of the New gods over the last several issues. In this chapter we learn something more about one of the New god defectors and why he cares so much for us puny mortals, it’s a neat little twist that I wasn’t expecting, great stuff!

Sean Hill does a great job. His splash page of the Octopus attacking resistance members is a stand out in this issue. Since the characters are obviously inspired by DC’s “Justice League,” as in; “What if the Justice League were villains?” There’s sure to be comparisons to JLA artists, and I’m sure this is done on purpose. If I had to guess, Hill was emulating, without directly ripping off, Howard Porter with maybe a little Kevin McGuire mixed in. All in all He has fun paying homage to artists who probably inspired him.

The amphibian New god is attacking with all his might and leaping from the cover into the readers face! Behind him are many sea creatures that he seemingly has control of. with a surge of water pushing them forward. It’s sure to evoke a certain passion from any comic store surfer that sees it sitting there, waiting for them to grab it and buy the issue.

There’s a critical turning point by the end of this issue. One of the resistance leaders decides to take on a New god. This allows time for his cohorts to escape. Can a mere mortal kill a New god? You’ll have to read on to find out! Chaos decides that the prisoners aren’t worth enslaving and wants to kill them all! …To be concluded.***