“…you carped the hell outoutta this diem!” – Bennett. He..." /> Review: Finding Omega #1 – Comics for Sinners
Reviews 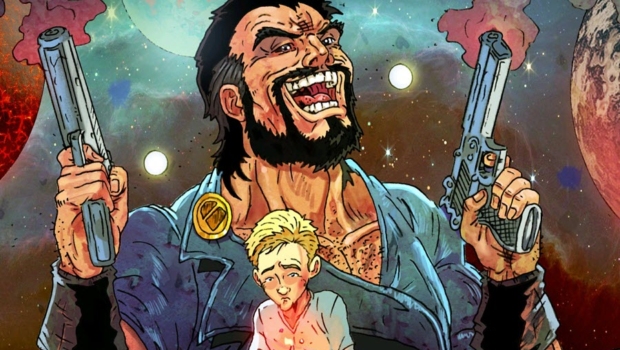 “…you carped the hell outoutta this diem!” – Bennett.

Here’s another little gem I found from an independent publisher. This issue opens with a character named Lancer that calls himself the King and he kidnaps a terrified 11-year-old boy, Ray Wall. Due to ghastly circumstances, which I won’t reveal here, the space ship and Lancer are Ray’s new home and family. This is a prime example of when life hands you a lemon…only you can’t make lemonade without sugar, and it doesn’t look like Ray is going to find any sugar anytime soon. An intense opening to say the least.

Tylor Burnworth wastes no time putting his 11-year-old protagonist to the test. He’s thrust into a situation no 11-year-old should have to face, and he must grow up way to soon. It’s a grim beginning to a comic book that asks us to accept that this boy isn’t Tom Sawyer or Huckleberry Finn. More like Macaulay Culkin from The Good Son. The difference being that, unlike Henry Evans (Culkin from the Good Son) Ray Wall has a conscience, he’s no psychopath, he’s brought to tears by the evil he experiences, and we are drawn into the emotion of his plight, it’s well written and definitely great stuff!

Austin Brooks brings a great deal of emotion to each character. Bennett seems like an evil creature from hell and we can read that in his face. Ray is thrust into this world unwillingly, an average kid that is put into this situation against his will and we see the range of emotion; fear, anger, sadness. Brooks art is simple, yet effective, giving this issue a pulp feel, 1940’s style. Yet with a modern-day sensibility. I enjoyed every page of this issue.

After the ghastly situation Ray is thrust into, we’re given a flashback scene to when he was with his father. We see a fun-loving boy at play with his own robot, shades of Billy Mummy’s Will Robinson from Lost in Space. When we’re brought back to the modern day, we’re told that it’s Ray’s unhappy birthday and then Lancertells him…to be continued.