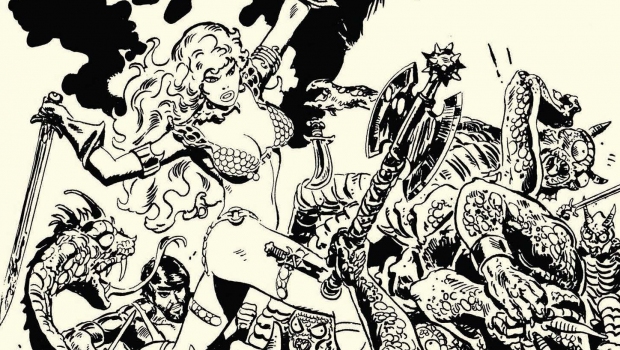 I have never been shy about my admiration for the work of Frank Thorne, the artist who singlehandedly made the barbarian warrior Red Sonja, She-Devil With a Sword, such a recognizable comic book character that to this day even non-fantasy fans, when they hear her name, immediately think of a sword-swinging redhead in a chainmail bikini. And this in spite of the fact that he wasn’t the first Marvel Comics artist to draw her (that would be Barry Windsor-Smith, in 1973’s Conan the Barbarian #23), or even the artist who designed her iconic look (that would be Esteban Maroto)! Hell, I even wrote a salute to him in 2014 in honor of his eighty-fourth birthday.

Which brings us to Frank Thorne’s Red Sonja Art Edition, Vol. 2, recently published by Dynamite Entertainment. Oversized, hardcover artist editions have become all the rage these days, as IDW proved when they started the trend by releasing Dave Stevens’ Rocketeer in 2010 and Walt Simonson’s Thor in 2011. And after the success of Thorne’s first Sonja edition (yes, I did run out to purchase a copy), it was only a matter of time before Dynamite got around to releasing a follow-up (with a third volume in the works). Even at the somewhat staggering cover price of $150.00 (none of these artist editions are ever cheap), it’s still a book that’s been worth the wait.

Here you get to see Thorne’s lush black-and-white artwork just as he created it, down to the Wite-Out corrections and paste-up hand-lettering fixes. His women are beautiful, his men either ruggedly handsome or outright grotesque, his backgrounds incredibly detailed, and his page layouts bordering on the psychedelic. It’s the work of an artist truly in love with the genre he’s working in and the character he’s drawing—and that doesn’t even take into account the traveling “Wizard and Sonja” shows that he and various cosplayers would perform at conventions during his reign as Sonja’s Artist Supreme. (Note to comic historians: One of those Sonja cosplayers was Wendy Pini, who not only co-wrote one of the stories in this collection, but went on to co-create the renowned fantasy comic Elfquest.)

Bottom line? If you’re a longtime fan of Thorne’s work, or have just discovered it, this book, pricey as it is, is a real treat. If you’re a Red Sonja fan who, in these increasingly PC days, prefers their she-devils drawn in an unapologetically sexy style, this book is a must-see. Grab that handtruck, head down to your local comic shop, and pick up a copy—you’ll be glad you did.