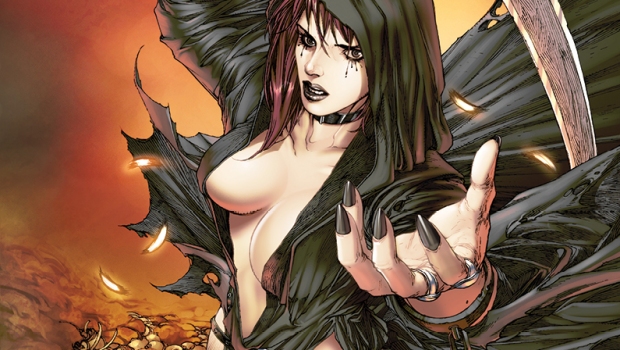 So here we are again. Raven Gregory feels an itch, he scratches it and something happens… something that makes you want more!

I am not only talking about the decompression in this issue or at least the lingering story, the pace which feels too slow but actually is plain perfect. There is something alive in these pages, something like the tattoo on a certain writer’s arm, which is coming alive. It feeds of his brain and settles in the pages of this comic, nurtured by colors and pencils, editors and coverartists, it becomes less dormant and ever the more real.

The cataclysmic events opening the story adds to the subtle occurrences and observations further through this first debuting comic, making it even more disturbing and provoking. Raven Gregory makes the dialogue between the regular folks feel ordinary and instantly you feel connected.

Keres, the Goddess of the Death, has come to live and the readers see how she walks through the rubble of men and the ending of this comic makes it only worse… because this comic is just too short!

The darkness that fills Raven sometimes (of which we see some very intimate and personal part of in the concluding pages of this comic) makes for fascinating stories and I respect Zenescope for letting him carry this forward and onward.