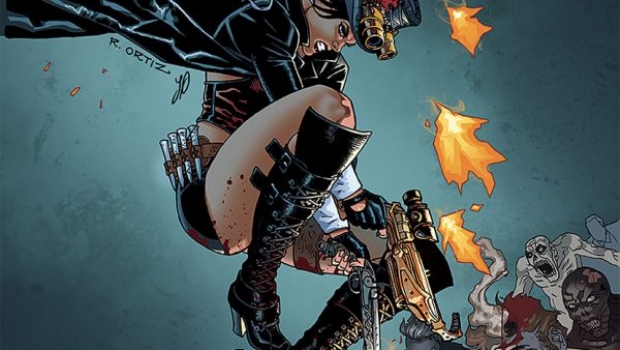 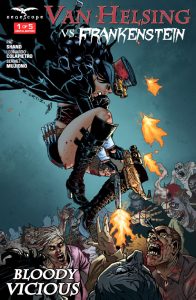 The action begins right away and special guests Robyn Hood and some of her friends are assisting in this demon hunt. Once the battle is over the heroes sit down and reminisce about the old days and how good it is to see each other again. Liesel wants Hades to join her that weekend but Hades forgot about their plans and has to meet with Zeus. He offers to cancel like a good little boy friend does because he wants to please the woman he loves, but she tells him to keep his meeting. Hades reveals that he has to deal with a mothman situation, which is a type of monster he’s never dealt with before. Fresh off of his mis-adventure with his daughter from the Hellchild series, we see that Liesel and Hades are now closer than ever.

Pat Shand brings one of his most popular characters back in this new series. This story opens with Liesel and Hades attacking what appear to be Zombies. The narration tells us that 36 bodies were reported missing in the Brooklyn area and it seems that they were somehow re-animated. Liesel gives us a good description of why she hunts vampires as opposed to other monsters. We’re introduced to new characters, well, new to Liesel’s universe they’ve been around in Robyn Hood’s circles for some time and we are set up for what promises to be a hell of a ride in the next issue.
Leonardo Colapietro is a great find for this title. His art is some of the best in current comic book circles. His mothman, when it finally shows up, is truly terrifying and his action art is sure to please the Zenescope fan base on this title. And it should delight newcomers to the whole Van Helsing experience as well. One scene I particularly enjoyed is when Liesel is asked if she remembers friends of Robyn Hood because they were at Marian’s wedding and she doesn’t recall. They reply that they were too timid to introduce themselves because she’s such a legend to which Liesel replies “Oh please.” And she’s drawn with her eyes rolling into the back of her skull. A simple scene but it served to flesh out the characters and make them real. Great stuff.

This cover should appeal to fans and new-comers alike. Van Helsing is dropping onto the crowd with her guns drawn and firing away at a group of apparent Zombies. An angry grimace on her face. This cover is reflective of what’s going on inside Incredible art overall.

Liesel’s world seems to be back too normal. The situation in Hellchild has been taken care of with Hades and his daughter becoming, if not friendly at least amicable and their problems have been sorted out for now. Liesel isn’t used to hunting creatures other than vampires and even though she’s uncomfortable with that situation she lends her demon hunting expertize to Robyn and her friends. Hades has his own demon to battle and we see a slight friction when Hades has to break his promise and rush off to Olympus to deal with a different situation. There is a shock at the end of this issue to let us know that the next issue will be even more intense. To be continued. *** 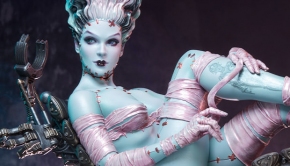