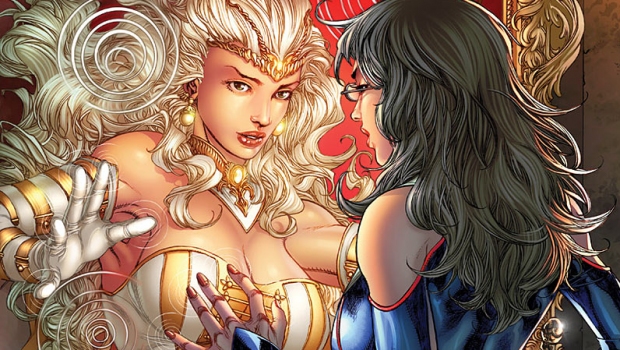 When I first started following Zenescope, it was all about fairy tales gone grim and dark. When Raven Gregory set out to re-imagine the tale of Alice, the white rabbit, Cheshire cat and all of Wonderland it was a defining moment for me. Wonderland came to be my favorite title for a long time to come and the adventures of the Lidl family were as exciting yet dark as they can be.

After what HAS to be at least 100 issues (go count them here) of Wonderland mayhem, the various Zenescope Realms have been connected and a new crossover GRIMM FAIRY TALES vs. WONDERLAND is starting.

Calie has overcome most if not all obstacles in her turbulent life and now is the ONE ruler of Wonderland, making sure the madness of the land does not spread, but will be contained and even cured.

When Calie discovers Shadow Spades using a secret portal to wreak havoc on Earth, she meets an overzealous Sela Mathers, who takes her job as Guardian of the Earth Realm all too serious and makes her move…

This story is a great jumping-on-point for fans of Wonderland or GFT alike. Writer Troy Brownfield made sure the correct characterization of strong females, crazy rodents and repenting critters is being heard.

The one thing I find off is the coloring. I have seen the inked art of Luca Claretti and it is much more effective to convey the story and the coloring sadly makes that a lot less enjoyable.

I also do not really understand at all the fact that Calie and Violet, being mother and daughter, look the same age. Unsettling.

All in all the verdict is that this crossover is spot-on, makes both lead characters from two of the most successful titles of Zenescope worthy in their own accord and makes sure this series ADDS to the overall entertaining value and not merely milking the cow, so to speak.