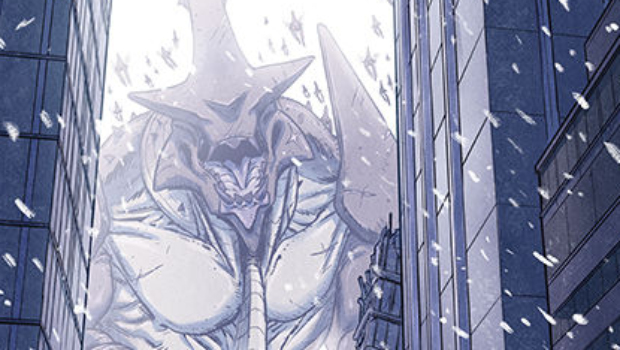 Gogi is stranded on the surface, the white world. It’s a frozen wasteland and he’s alone, burning with fever and haunted by what happened to Zedo, time is running out for him. He must return to the underground city before the monster’s attack!

The Valderrama’s take Gogi in a different direction in this issue. Our protagonist meets a group of people that call themselves The Forsaken. This group tells him that it’s impossible to return to the underground city all the while Gogi is burning up with fever! Then we cut to some of the gritty realism of the underground city after one of the forsaken tells Gogi that he would rather be on the surface than in the underground prison as he calls it. Carlos and Miguel paint a grim picture of life in both society’s and it looks like one choice isn’t much better than the other. It’s a good issue that shows us that his choices are, like the cliché says, between a rock and a hard place in Gogi’s world. No matter what he does, he’s going to suffer for it. It’s at this point that the action heats up!

Carlos and Miguel are both credited with the artistic chores and the art gets greater as this issue progresses. As I noted in my Van Helsing V the Werewolf review, it’s not as easy as one would think to render a snow driven wasteland and these two pull it off quite well. The showdown with this issues monster is well-drawn and the obligatory splash gives us a feeling of helplessness as our heroes struggle to find refuge. It’s great stuff!

Gogi is seemingly in a no win scenario. You’re screwed if you do and you’re screwed if you don’t…in his case, what he wants to do is return to the Underground city, because it ain’t cold there and there’s no monsters…well, none that look like monsters anyway. However, life in the underground city is a living hell! At the end of this issue we see that Gogi might have a choice in this matter after all…to be continued! *** (8.9 rating)