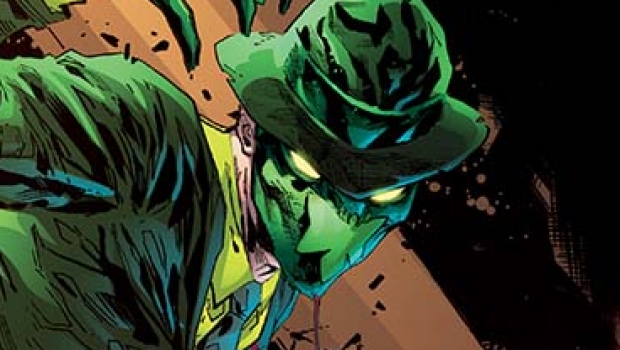 This issue opens with our heroes attacking the villain Demone. Another hero wannabe shows up that calls himself the swashbuckler. After Demone and the Swashbuckler disappear, the Hornet and Kato go home. Next we see Britt Reid waking up to a newspaper headline that reads that two ladies were rescued from the Green Hornet by the Swashbuckler. Disgusted, Reid tosses his newspaper aside. A fun way to open this issue. we see The old “Hero is considered villain” cliché but put to good use as it serves to cause tension between the Hornet and Kato.

David Liss is constructing a good tale with an interesting villain in this story. He has the Hornet and Kato along with their female companion, the reporter Travis, meet the police commissioner at a restaurant (in their non super-hero personas) to discuss the case. The commissioner implies that Demone is either Industrialist Giusto Gareri or else that he is associated with him. He hopes that Reid takes the bait and does a story about this possibility on his radio station. Liss is taking the classic characters to new dimensions and giving them some competition in another masked do-gooder. It’s a refreshing entry into an age old franchise that might need a little boost, great stuff.

Kewber Baal is back! I’m glad to see one of my favorite artists on this title. Dynamite is getting as much mileage out of this talented penciler as they can and I’m glad to see them do so. His panels always help what issue he’s working on flow. the story unfolds in this issue so smoothly and his action scenes always compliment the author.

This cover is sure to bring out Hornet fans and peak the curiosity of anyone new to this story line. It shows the title character twisted and contorted into a demon like pose. Anyone who has ever been a fan of the green hornet is sure to wonder what’s happening to their crime fighting hero. It should also peak the curiosity of the casual comic store surfer that might be interested in what’s going on even if they’re not Green Hornet fans. Great stuff!

Who is the Swashbuckler? What is his connection to Demone? Is he really another masked hero or is he somehow in cahoots with Demone? what is Demone’s connection with Giusto Gareri? The mystery deepens as our heroes are in a race against time to solve this problem. It also seems that the two Chinese women who were being attacked at the beginning of this issue are a little more than just damsels in distress. This issue ends on a dramatic note and the Green Hornet may be in for a surprise. all in all a good chapter in an intriguing story. To be continued.

Green Hornet Reign of the Demon #2