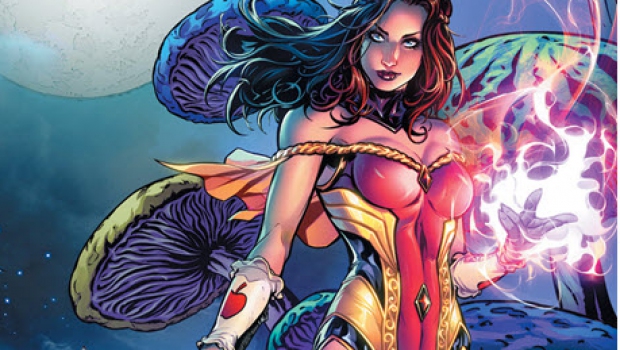 To paraphrase Shakespeare ‘Uneasy lies the head that wears the mantle of Guardian of the Nexus’…as Skye Mathers has found out during her time as the Guardian, and nothing makes the head more uneasy than being in the madness that is Wonderland.

In her quest to find the armor of Arthur of Camelot and hopefully to finding her mentor Shang, Skye has traveled through the 4 realms, finding pieces in each. Now her search has brought her to the madness that is Wonderland to save her friend Stephen. But she isn’t the only one after the armor or Stephen. A captive, Stephen, and us the faithful reader, are told the reason for the troubles that Skye and her friends have faced. Power! As all things are about. With the armor of Arthur the wearer will be unbeatable and have the power of a God as it was meant to house the power of the Grail and Stephen, or Hephaestus, is being forced to make the final piece of the armor. While Stephen and us the reader are told the history of the armor Skye makes her way through Wonderland meeting a familiar face as she’s warned about continuing her search, a warning she ignores as the Guardian and because she IS her mothers daughter.

So far we’ve seen the other Realms and what’s happened in the ensuing time since we last visited (unless you don’t read the other Grimm Universe books). War has spread, heroes have died, alliances have forged and new friends and enemies have been introduced. As the central book and ‘Heart’ of the Grimm Universe the wide screen aspects of the story have been fun to read and seeing how it’s influencing the other titles, either directly or tangentially. Like the other issues in this storyline, it moves at a very brisk pace, which is, in this writers opinion, the one thing that hurts it. There’s been a LOT of info throw at us, a lot of action, and a LOT of exposition, this issue especially. I know that Zenescope puts a lot of story in small spaces but sometimes I think it would serve them better to let it breathe a little, to let the writer and artist just take some time and let it grow. The interactions between the huge amount of characters are wonderful, each has a personality and aren’t just the same person with a different costume, but it’s just a tad rushed. They all get a chance to take the spotlight but not enough for us to really get a great feel for, unless we already know them (which I will admit to not knowing a lot about the Neverland Realm).

The Story– It’s been fun so far, and as I mentioned it’s racing along at a fairly quick pace. The characters and Realms are handled wonderfully but I do wish they would take a breather and let the story have some more room to grow. Let the characters have a chance to to take up some pages space and show those of us not familiar with all of them what makes them special.

The Art – It’s Zenescope. Solid, strong storytelling, well defined. You can’t find much fault with it. The house style is one of the best things about this series and Zenescope as a company as a whole but with each artist having their own unique touch coming through as well.

The Colors – I like a well colored book. I like bold, dynamic, strong colors in certain cases, this is, regardless of the setting, a superhero book and the colors just show off the worlds and characters in that way. Beautiful work.

Lettering – I know they’re considered the step children of the comic work, not really taken serious by a lot of people but a letterer can make or break a book. These are handled with care and a strong hand in word ballon placement and efx and narration to keep them all different and unique to the characters speaking.

So what do I think? I’m looking forward to where it’s going and the ultimate ramifications it will lend to the greater Grimm Universe at large after it’s all over.