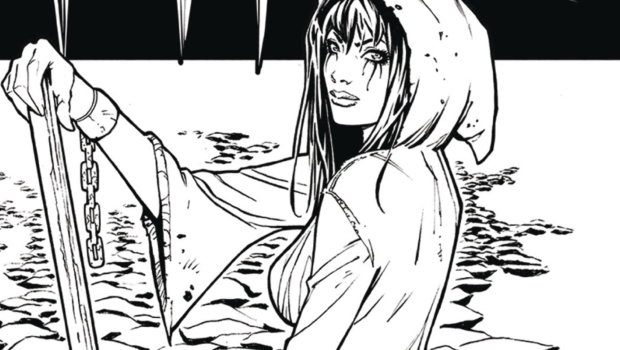 Can a black and white comic book survive in today’s market? Zenescope is about to find out! This issue proudly announces that Grimm’s Tales of Terror is coming to the big screen as a major motion picture and one of the stories in this collection is based on the upcoming film. 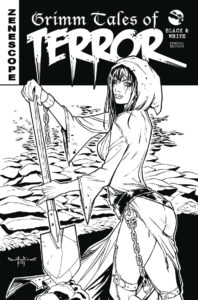 Joe Brusha starts this edition in 1892 North Dakota. Two young ladies meet in passing, Lana and Keres. Lana is the local school marm and has two twin students Sabrina and Mary. When the class mascot, a cat named Mrs. Fluffy, had kittens Lana thought it would be a good idea to give two of them to the twins. However, their father didn’t think it was a good idea. Taking things to a new level of cruelty he dealt with the issue in a barbaric way, however cats have 9 lives and you know what they say about Karma.

Now we come to the second story in this little opus. The Black Cat. It’s interestingly told in script format with the art on a separate page. A young lady named Amy is jogging on a suburban street in Salem Oregon. Keres accidently runs into her while she’s listening to Drake’s Hotline Bling. That’s when the Black Cat crosses her path. She goes out sun-bathing while her boyfriend, Henry, meets one of their neighbors, who calls herself…Cat. Then things really get weird.

Yusuf Idris makes good use of the black and white format as he unfolds the two stories in morbid fashion. The opening splash is serene enough, Lucy sitting next to a bridge over a river in North Dakota, but then all good horror stories begin with the calm before the storm. The shadows and contrast grow more horrific as we meet the twins father, the local blacksmith. His visage is twisted with years of pent up frustration, it’s great stuff!

Two tales worthy of a Tales from the Darkside episode are brought to great life by the current masters of the anthology format…Zenescope. If you like twisted horror stories then this one is definitely for you. Intriguing and thought provoking with the promise of Lucy’s story being continued in the upcoming movie. *** (7.8 rating)