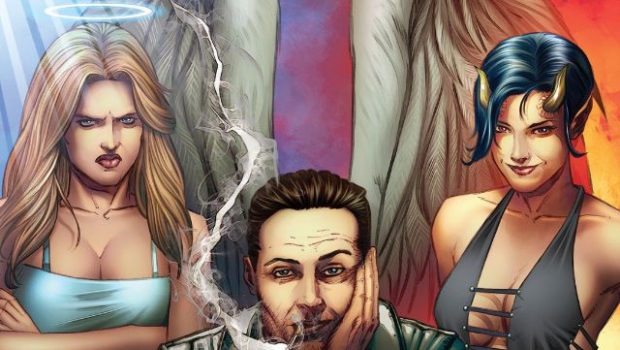 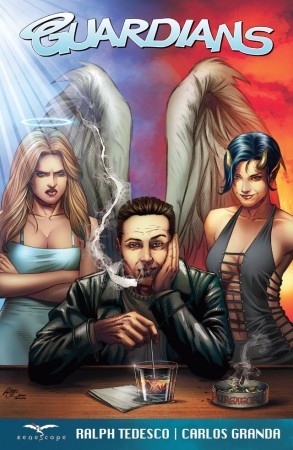 Hey, do you remember that time John Travolta played an angel?

It’s true. Although it was a box office hit (according to reports at the time), Michael, released in 1996, isn’t one of those Travolta-led movies—like, say, Saturday Night Fever, Grease, Pulp Fiction, or even Look Who’s Talking?—that come immediately to mind. This fantasy comedy from director/cowriter Nora Ephron (Sleepless in Seattle) involves a trio of tabloid reporters sent to investigate stories of a woman who says an angel is living in her boardinghouse. Of course, it turns out the stories are true; in fact, her heavenly boarder is the Archangel Michael, who’s come to Earth to enjoy himself while helping some lost souls. He’s a sugar-addicted, cigarette-smoking partier who loves dancing, and walking around in his boxers.

It was Michael that popped into my mind while I was reading Guardians, a graphic novel written by Ralph Tedesco (Grimm Fairy Tales), illustrated by Carlos Granda (Pirouette, Escape From Monster Island), and published by Zenescope Entertainment. Here, we find a world in which everyone—men, women, children, animals—has a guardian angel looking out for them, with the angels acting as the celestial equivalent of social workers, juggling multiple cases. But not every angel is good at their job, as evidenced by the story’s lead character, Tabbris: a grungy, boozy, down-on-his-luck angel who’s fallen quite a ways from his former status as one of the greatest guardians of all time—this guy helped Moses guide the Israelites out of Egypt! There’s a reason for his self-pitying attitude at the heart of the story, but the main plot involves a conspiracy between heaven and hell that—as you’d expect—can only be disrupted by Tabbris, with the aid of his comic-relief sidekick, a fellow loser angel named Nathaniel.

Storywise, Tedesco tells an entertaining tale, a buddy-action-movie that would have been right at home in the 1980s alongside a double-bill with 48 Hours, Running Scared, or Red Heat. However, there are a few moments when an apparent need to remind us that Tabbris is a self-serving ass gets a bit repetitive and the reason for his slide into debauchery comes across less as comedic and more as whining about something that happened more than two centuries past. It misses the mark as presenting him as a “lovable loser,” and instead hits the target of “selfish douche bag.” I’m not sure if that was the intent, but if you thought of it as putting wings on Jack Cates, Nick Nolte’s character from 48 Hours, it could work…

As for Granda, I was first attracted to his art in the pages of Black Mask’s aborted miniseries Pirouette, and enjoyed it just as much in his latest Zenescope project, Escape From Monster Island (which I’ve also reviewed). Here, he brings to life all of the story’s settings—Earth, heaven, hell, and purgatory—and handily avoids the artistic pitfall of having characters look alike. They’re all distinct, with an air of elegance or grunge each their own—although, this being a Zenescope title, it’s pretty much a given that all his women are curvy and beautiful.

Bottom line? An entertaining, fast-paced story and attention-grabbing art make Guardians a graphic novel definitely worth checking out—by both you and that guardian angel hanging over your shoulder. They like to read, too, y’know.