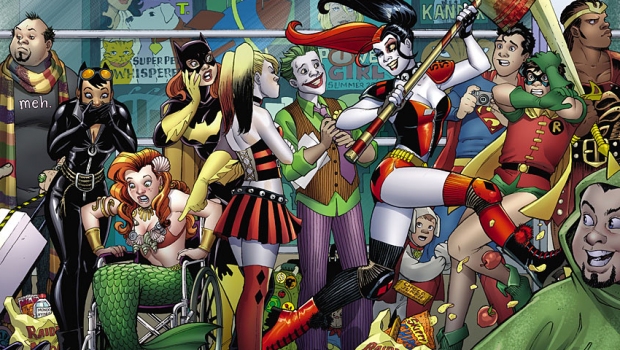 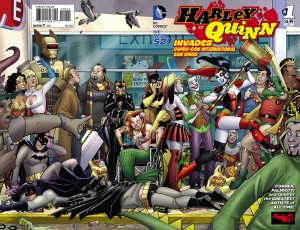 I don’t know… There’s just something about stories set at comic-book conventions that appeals to my nerdish tastes. A recent issue of Scooby-Doo! Where Are You? (#47), where we discover that Velma is addicted to a Pokemon-like game and Shaggy is on the hunt for rare comics? Great! An issue of Archie & Friends (#156, from 2011) in which Archie and the gang cosplay at the Riverdale Sci-Fi Con? Brilliant! A segment of the 1990s cartoon series Freakazoid (“And Fanboy is His Name”) in which the costumed lunatic offers a fawning wannabe sidekick “your very own Harlan Ellison”—and then proceeds to grab Ellison, who’s standing nearby, and hands him to the kid? Genius.

And now we have Harley Quinn Invades Comic-Con International: San Diego #1, a one-shot special from DC Comics that has a title almost as lengthy as the convention itself. (And released just in time for the 2014 show. Coincidence…?) Written by Amanda Conner (Harley Quinn, Before Watchmen: Silk Spectre) and Jimmy Palmiotti (Jonah Hex, Power Girl), it stars the Joker’s psychotic girlfriend as she makes the trek, like so many aspiring comic artists before her, to the pop-culture Mecca to find employment. And like those starry-eyed talents, she dreams of having her own title to write and draw—in fact, she has a proposal for one, with sample pages (drawn by Conner). It’s “Hurl Girl,” the adventures of a history teacher who battles criminals by…puking on them.

Since I haven’t been reading the new Harley Quinn series (or even many of the Nu52 titles, for that matter), this one-shot is handy in that you don’t need to know the events of her series to read this comic. It’s Harley causing trouble at San Diego Con and that’s it, with the sort of in-jokes you’d expect from a con-themed story: playful digs at Jim Lee and Dan Didio, guest appearances by DC staffers and Harley’s creators, Harley wandering into a roomful of Jokers in search of “Mistah J,” and then going on a girls’ night out with a limo stuffed with Harley cosplayers. There‘s even a guest appearance by the 1966 Batmobile.

However, the writing could have been dialed down a notch. In the past, Palmiotti has given the impression that he was once bitten by a radioactive Don (Killraven, Black Panther) McGregor and gained the latter’s power for writing not word balloons, but large blocks of text surrounded by an oval shape. That power’s on display here, though not as evident as it was in, say, Power Girl. Which is a good thing. But then there’s the repetition gag. As sitcom writer David Evans explains in his “Seven Laws of Comedy Writing,” the Rule of Three used by just about every comedian is “the repetition of something three times, with a switch at the end of the sequence.” The running gag in this special is that Harley sees actors from television series she enjoys and blurts out two or three word balloons’ worth of information in compacted type (likethiswhichishowherspeakingreallyfastisdepicted), followed by a separate balloon at the end stating “I love that guy [or girl].” The gag is used six times. There’s a reason it’s called the “rule of three,” because after the third time the joke becomes really annoying. (On the other hand, Harley does get thrown out of the con three times, so the rule works in that regard.)

As for the art, it’s good enough to get across the mayhem of a Harley story, and definitely shows how crazy and crowded SDCC is, but here’s a note to DC Editorial: I understand the need for hyperbole to sell copies, but when you state on the front cover that the issue’s art is by “some of the GREATEST ARTISTS of ALL TIME!” you need to deliver. John Byrne, Neal Adams, George Perez, Walt Simonson, Adam Hughes, Kevin Maguire, and Jaime Hernandez are some of the greatest (living) comic-book artists of all time. Paul Pope, Robert Campenella, John Timms, Marco Failla, Dave Johnson, and Stephane Roux, as talented as they are, are not, even in a Kanye West, I’ma-let-you-finish-but use of the phrase. You’d have been better off just listing everyone’s surnames, like you do on most of your covers.

Bottom line? A cute though overlong special with some quirky art, Harley Quinn Invades Comic-Con International: San Diego may be good for fans who’ve never been able to experience the madness of pop culture’s answer to Mad Max’s Thunderdome. But for a $5.00 comic, it could have been better.