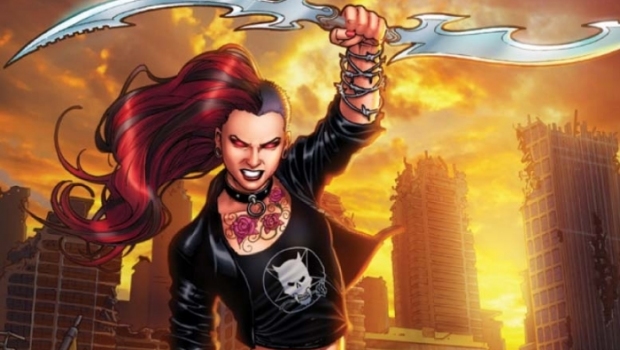 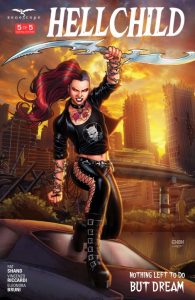 In this Hellchild the god of the underworld, Hades gave birth to a daughter he named Angelica. The father and daughter had a falling out with each other and due to his own ignorance Angelica was killed. Time goes by and this Bad dad turns over a new leaf and has mellowed. He’s in a loving relationship with vampire hunter Liesel Van Helsing. But, as they say, what goes around comes around and due to his past evils a new threat emerges in the city of New York. Angelica, who had been resurrected, still resents her father and forms an uneasy bond with vampire Olaf, who leads a new tribe of bloodsuckers. They have imprisoned Hades. Van Helsing has her own problems to deal with, namely a subway car of vicious vampires.

Pat Shand has brought us a great final chapter to this story which opens with Olaf entering a gathering of his fellow vampires and they have to talk to him. He muses whether or not this is an intervention in one of the lighter moments of this issue. Then it takes a troubled turn as we see betrayal and fragile truces are destroyed. Angelica is bent on destroying her father who is still chained to the dungeon wall, he’s joined by Artemis, whom he hasn’t seen in a few thousand years. Father and daughter finally face each other in a mental conflict that brings both to a realization about their relationship that changes their views about each other. Shand’s writing is still on top as we go the distance in this family squabble.
Ricardi, as always, comes through with compelling characters and great scenery. One confrontation between Olaf and Angelica is gut wrenching and brings a grim feeling of foreboding. The way the characters transition before our eyes is impeccably well done. I love the final panel as drawn. The story ends on a satisfying note. Not with a bang, but a whimper.

Another cover that should draw the interest of the casual comic book surfer. Angelica is in the foreground with her weapon held high above her head. She looks upset and her eyes are glowing red. Her other hand is making a fist while her left leg is bent at the knee and pointed forward the other leg is bent at the knee as well but pointing down to the ground. She’s poised for battle and ready to fight. The backdrop is New York City. Letting the reader know that if (s)he opens this issue she’s ready to see a bad ass kick New York’s but!

We come full circle as we see Hades imprisoned and about to be executed. Angelica has been betrayed by a main character and Van Helsing is involved in another fight and has been delayed in the rescue of her lover. A great story, if I have any criticism of this issue it’s that we don’t see enough of Olaf. I think his character should have been more prominent. Other than that this is a very satisfying conclusion which makes us wonder about the future of these characters. Will Hades and Van Helsing continue their relationship or has it been strained to the breaking point. Will father and daughter reconcile? Some of these questions aren’t completely answered by the finale leaving the possibility for another story at another time. I enjoyed this series very much.