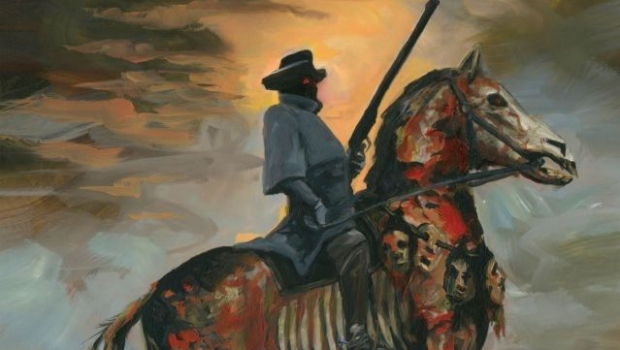 Review: Horror In The West

Here’s another one of those little gems I’d never heard of but just discovered. Western horrors have always intrigued me. As a kid I saw the low budget Billy the Kid V Dracula and loved it. There aren’t many good takes on the combined genre, but if one looks hard enough, ardent fans can find a gem here and there including Grimm Prairie Tales and Ravenous. And now we come to the comic book equivalent. An anthology of weird western stories. 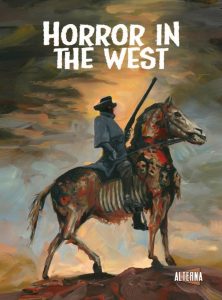 Sam Agro brings us the opening tale called Star Calf. The protagonist comes across a meteor that crashes near his home and there’s some kind of alien creature inside. He was about to shoot it, but he had an odd feeling which compelled him to bring that creature home and named her Mavis. It’s a strange story about an odd couple that must deal with fear and prejudice. Mankind is in for a jolt. Great intro story and art.

Under the Mountain is the next tale. A railroad company hires some cowboys to take out whatever creature is halting production of the next railroad. A mysterious Indian on horseback is watching the whole ordeal. He confronts the lead cowboy to warn him about violating sacred ground. The build up to what comes next is intense and Phil McClory takes us on a trip to an unknown world where superstition meets reality, I enjoyed the conflict between the cowboy and Indian. The art was a treat as McComesy and Copland capture the feel of the old western movies in a unique way. Any fans of horror, westerns and genre mash-ups should take to this intriguing comic book brought to us in glorious black and white and told as only alterna-comics can tell it. Great stuff.

I wish more horror/western mash ups existed like this one. The creators obviously enjoy both genre’s and combine them with an ease I’ve never seen in the world of comic books. As a fan of Jonah Hex I can tell you that these creators could probably have kept that character alive. It’s spooky fun and I hope they continue to bring us awesome western/horror mash ups.

Horror In The West 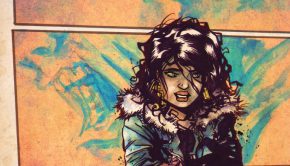