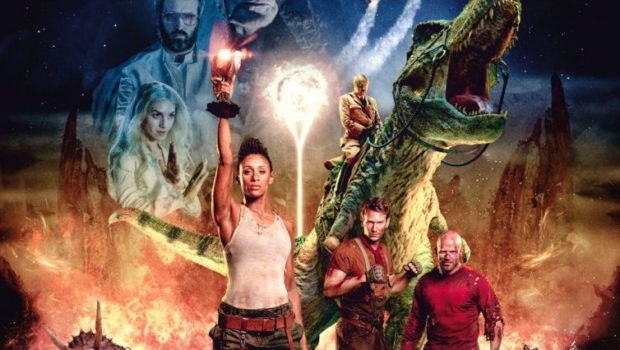 Even though the first Iron Sky was not exactly high-level satire, the first movie had a nice solid idea which they carry-forwarded into a certain future. The idea of classic Nazi’s were on par with the right wing of the American Republicans.

And although in 2012 it was considered satire, sadly the movie currently is a parallel with the American “Captain Orange”, the way he goes about his decisions and even the support of Neo-Nazi’s. Who could have thought??!!?!?! You take a satiric approach which is absurd to no extent and then… it seemingly becomes real within years!

The first movie too the satire to a nice level. It was not too big to make it too political and with hilarious moments reminiscing of ” ‘Allo ‘Allo! ” (a satiric TV Series 1982–1992) and with nice starwars/startrek–tributes and even adding some SJW-blacksploitation it was a nice mix of things. Especially that black-SJW would nowadays be a total no-go sadly, but o well. Perhaps we just have to wait a few years to see thát particular trend to come to their overly-sensitive senses.

Perhaps due to the fact most of this stuff from #1 became real, to everyone’s horror, the #2 keeps it at a minimum. #2 is more gearing into meaningless context, with nonsense ideas adding to better visual effects.

After the first part ended with a nuclear war on earth, in the sequel that took place thirty years later, the planet became uninhabitable and a small number of people took refuge in the former base of the Moon-nazi’s. The explanatory voice-over explicitly states the interesting dynamic that this produces: the last earthlings must live together with former Nazis. Unfortunately, nothing is done with that fact and we see the inhabitants of the moonbase as the usual boring crowd in a dilapidated science fiction world that is completely unconcerned with ideology.

The only thing that comes close to satire is the prevailing religion on the moon: Jobsism. Yes, a parody of the messianic status of Steve Jobs and his Apple products. Anyway, The Coming Race clearly does not shy away from the beaten track and adds a LOT to the mix eventually: the hollow-earth theory, a reptilian alien race that would have produced all kinds of powerful world leaders and a secondary character in a red sweater (a ‘red shirt’… Star Trek reference here!!) that is constantly in danger of dying and that does not do it anyway … all these elements are muddled together into a mix that is overall a nice experience. Not a great but a good experience, since it lacks the “Allo Allo” satire and fun from the first movie, but that is by now well explained, no?

There is a small bright spot in the charismatic leading role of Lara Rossi, but she has to cope with written dialogues that feel off-key or just plain silly. Even Udo Kier is just a little lost … and he actually plays a reptilian Adolf Hitler on a T-Rex. Which is one of the greatest draws to the movie, that is for sure

Actually the first Iron Sky managed to impress despite its tight budget and with SFX looking oldskool-ish cheesy, yet The Coming Race underwhelms at points …

Testament to the first movie is that I actually cheered when actress Julia Dietze came back in a more leading role. She already captured my heart in the first movie and continued to do so in this one!

Even though I might feel like dissing too much here, I do like the movie. As with the Sharknado-franchise (which obviously took too long to die out) you have to balance out what you want out of this Iron Sky franchise.

You just know it will be cheesy, roll-eyes, fun-filled, annoyingly acted yet cheerfully received. Personally this #2 just makes me want to be more eager for the #3 finale which has been announced!

Iron Sky: The Coming Race is a 2019 Finnish-German comic science fictio naction film directed by Timo Vuorensola. The sequel to Vuorensola’s 2012 film Iron Sky, its production was crowdfunded through Indiegogo. A major inspiration of the content (and title) is the Vril conspiracy theory. The film was released on 16 January 2019 in Finland.