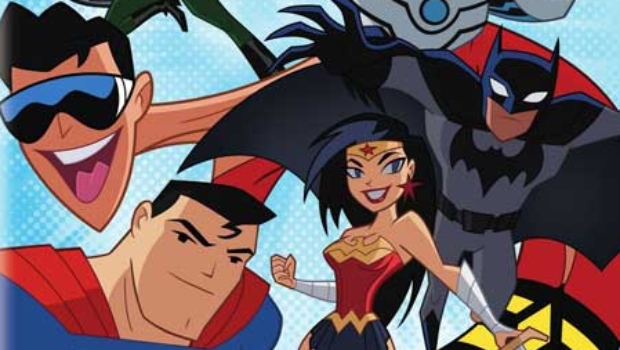 I remember seeing it for the first time, the intro gave me goosebumps.

Now there’s a new show in town, just in time as the live action movie has hit the theaters. Of course the cartoon is an entirely different beast. Much lighter in tone and very much aimed at kids 12 years or younger. Don’t worry about that, if you are the grumpy older comic book type you can enjoy it too, I did

, just don’t go in expecting a continuation of the older show. There are more jokes, by characters you don’t expect it from either. And characters aplenty here, we even get John Constantine and Swamp thing for example and they fit in just fine too. And what about Lobo, the Nuclear family and Parasite, really a wide variety of characters used. And this show isn’t called Justice league action for nothing, because action is definitely what you are getting here.

This first season has 26 episodes, each some 10 minutes long. Most of the time they start and you’re thrown in the middle of the action already. Being a show aimed at kids the stories are pretty straightforward and simple. Don’t let that put you off because they’re also fun. Heavily centered around the trinity of Batman, Superman and Wonderwoman, of course, but as mentioned with a wide roster of other characters too and still lots of unused ones for later seasons. Sames goes for the opponents by the way.
The first four episodes have an overlapping story, other than that it’s all standalone episodes, so this is a very easy accessible show where you don’t miss part of the story when accidentally missing an episode.

Batman is once again voiced by Kevin Conroy, Mark Hamill does the Joker (and more, see if you can figure out what) and all the others deliver a good job too as could be expected.
So that’s pretty much it. A show so easy to get into and simple in its execution storywise it almost leaves you without words to say about it. It’s all about fun and action really….hey, wasn’t that what got most of us into comics once upon a time maybe? If so, then buckle up and have yourself some fun watching this!