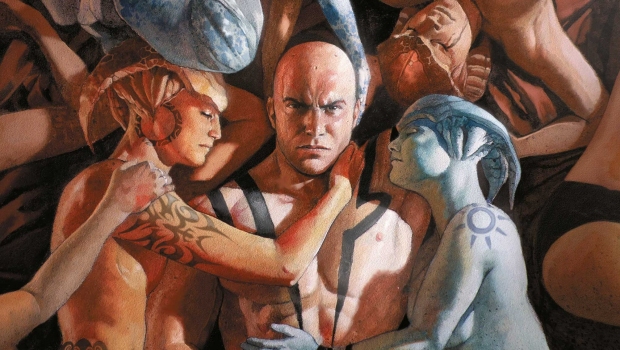 In a galaxy decimated by a brutal war, an ancient prison ship, called Empyreon, floats alone in the void. Within its ancient walls a new battle rages, as the three races who inhabit the doomed ship vie for the resources that will ensure their survival. Peace is an impossibility, as Khaal, the leader of the humans, is as bloodthirsty and ruthless as they come. 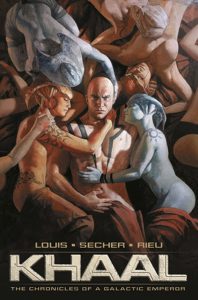 A lot of amazing stories are coming from Europe and this KHAAL is second-to-none! Titan Comics yet again discovers a true gem and Titan will stop at nothing to educate the comic-buying community that there is a lot of fun in reading something else then spandex-comics!

The advantage with the bigger format as opposed to the comic-format of course is a better view of the truly amazing artwork, but to be frank: the art here is SO good it works on either format-sizes!

Artist Valentin Sécher is the true eye-catcher of this series in making Khaal, the prison ship Empyreon, the alien races and the ensuing mayhem look so fantastically good, it is like looking at an art book.

Writer Stéphane Louis however makes all that amazing art feel like a giant space-opera/sci-fy/gladiator story that really wants to say something.. it is a story with a message! True, the message in the end of this story is told many times, in movies, cartoons and books and will come at no real surprise.

The real kicker is the way Khaal is handling the prison ships, the various races inside the immense ship, the cruelty of his being and how he came to be. There are so many layers to this story that at times you wish this to become a Hollywood-ending.

But this is not the case and be prepared to be overwhelmed!

Khaal is handling his relationship with his brothers like a true dictator, but the ante is really lifted when an outside force tries to enter the prison ship and wants to get to Khaal. They are in for one stunning surprise, that will usher in a new era for Khaal that will surpass him being a mere Emperor!

My only real qualm with this book, is that I feel I am sometimes missing a storyline. The 3 brothers have a history, but where was that told? The psy-lovers are not introduced at all and just how did Khaal become Emperor of Empyreon? And how did his ‘dog’ become his to order around?

O well… the story on itself is powerful enough and this way I can pine (bitch and moan, yell and demand, daydream) about a prequel to this truly stellar adventure!