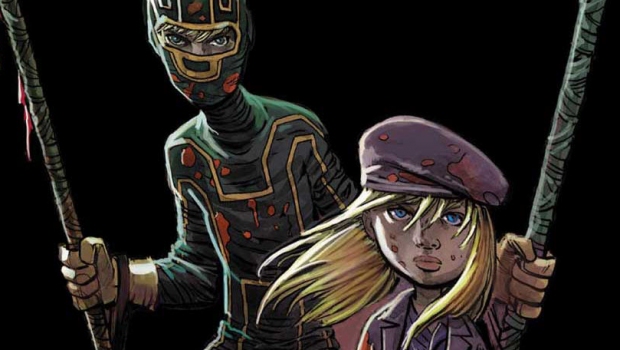 Reviewing a book like Kick-Ass is hard for me. I want to read comics to enjoy myself and also really want my collection to be something my kids can enjoy as well.

Sadly this title will remain with me until my kids has lost all their childish innocence, because… that is what this comic will do in an instant if they ever read it under-aged!

But never mind really. This is MY ride and MY fun and MY love for comics!

Having said that: what the HELL am I reading?!

This third (yeah THIRD, since you have to read Kick-Ass 1 first, then Hit-Girl and only then you will come back to this one, you turd!)  collection has as much screen-time for Kick-Ass as to Hit-Girl as the creators propel this story into one massive revenge-fest.

Kick-Ass is doing his regular stuff on the street with a superhero team, while Hit Girl has been grounded. Hit Girl choose to be the responsible and is actually ignoring Kick-Ass and his quest to be on the streets, making them a safer place.

But then the ultimate spoiled brat-scumbag from his past comes a-knocking and even Hit Girl cannot stand idle as her friend gets attacked, resulting in total mayhem and bloodshed all the while somehow delivering the message that ‘no good deed goes unpunished’ combined with ‘bad stuff happens when good people stand idle’ , which gives Millar those extra credit-points I am sure!

After you have witnessed this book, please go out and rent or buy the movie “Kick-Ass 2” (yeah, you turd. There are NO 3 movies and the second movie actually incorporates the 2d and 3d book!) to ‘spot the differences’!

This collection was re-collected for the UK market in June 2013 by Titan.