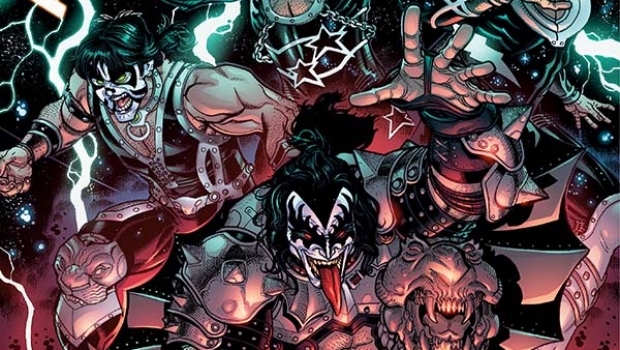 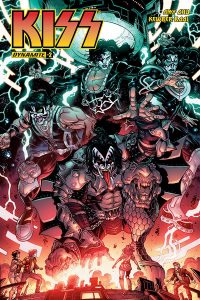 Everyone’s favorite rock band turned comic book heroes are back for issue two of this highly entertaining series. This issue opens with an animated presentation from “Citizen Sid” and shows the audience why Blackwell is the “greatest place on earth to live.” The animation proceeds to indoctrinate its audience into believing that their government has nothing but their best interests at heart and that the city needs to take care of its citizens so they will be safe. I especially enjoyed how the creative team uses a combination of cartoon graphics and propaganda to lull its citizens into a false sense of security. Why would anyone rebel against the perfection of the greatest city in the world? A good dose of 1984 and Big Brother with a dash of Logan’s Run thrown in for good measure. This is a Brave New World that was built for its citizens own good! There’s no ultimatum, there’s nothing you must do, it’s just an acceptance of the situation that you’re involved with, nothing can go wrong… right?

Chu brings a comedic theme to the age old dystopian after Armageddon type of story which is what I enjoyed about her approach to the material. There’s no sense of urgency, no feelings of doom and gloom about the main characters which you get from most of these types of sagas. The 4 main characters are just kids who want to know what’s outside of their Utopia. They stumble upon a map which promises to show them what’s outside. The authorities find out and are now searching for them.

Baal is in top form as his renditions of the Starchild, Demon, Cat and Space Ace are about the best you can find in the history of the bands comic book appearances. I like that, even in issue two we aren’t getting a full look at the band yet, only little teases as the four main characters make their way through the maze that is the immediate world outside the city. One of my favorites scenes is when the protectors of the city are introduced and we see a cross between Marvel’s sentinels and the rock band itself.

Wow! Now that’s a busy cover. I like the energy I feel with this one, it’s an attention getter. The Kiss members are larger (also a hell of a lot more muscular, lol) than life while our four protagonists are standing before them awestruck. The larger than life band is poised for action, about to use their unique powers and they’re surrounded with kinetic energy. A great cover to be sure.

The stakes get higher as we discover a little more about the city of Blackwell. The animated film which serves as an introduction to the city is a great way to introduce some of the much-needed exposition to the story so far and doesn’t feel contrived. After that introduction the city learns about the security bots and is about to witness a demonstration of their power when a cop interrupts to inform the governor that there’s been a breech. We cut to our four protagonists who discover a little bit more about the reality of the city they’re from. I enjoyed the scene where the four are trying to use an “ancient” computer from our era. The cops are closing in on our anti-heroes. Will they get away in time to find out more about the city?