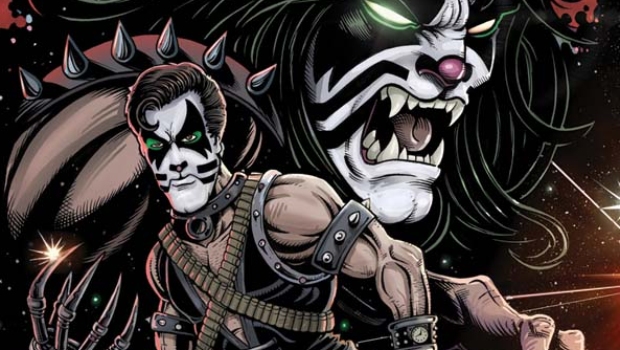 One of the things that bothered me about recent comics with my favorite rock band is that they were usually background characters or only influences on the main characters in the books that featured their name on the cover. Other than the meeting with Vampirella, they did not headline a lot of the recent comics with their name on it. There were good stories. But they, themselves, played second fiddle to the main characters or situations. Now, finally, our super-powered make-up clad fabulous (would I get sued if I used the word fantastic?) foursome finally spring into action against the bad guys! 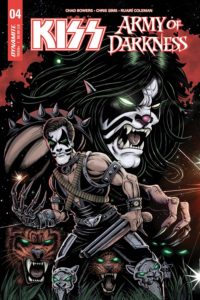 Bowers and Simms beef up the action in this issue and we learn something new about the Necronomicon and its relationship to the destroyer. Ash is not himself as the book has taken control of his life and this puts him in direct contrast to the King’s of the Night-Time World. The battle goes on with one spiritual entity taking control of Ash Williams and another trying to gain control of Kiss. Great stuff includes the demon possessed Ash splitting into four entities to take on our rock and roll heroes also Gene Simmons literally ripping the spine out of a creature that he thinks is Ash only to have another “Ash” leap at him from behind. I love where Chad and Chris are going with this title. It brings back Kiss as superheroes in ways that not even the Vampirella team up could do and we see what happens when the Necronomicon finally gains control of Ash.

Ruairi Coleman brings the main characters to death, as opposed to life, in unique ways which really grab the imagination. Kiss hasn’t been in a battle like this in a comic book since their IDW days and even then, most of their titles with them were kind of restrained (most, not all the time) but here we see them in action like we haven’t seen in a long time. Coleman gives this plane of existence an eerie quality that a book like this needs. Highlights include the splash where Kiss comes together as one and the battle between Kiss as one and the demon possessed Ash.

This book is so refreshing and a return to form for Kiss as superheroes. We see both antagonists at their best and at their worst as they sink deep into the abyss and must do battle with each other. This story almost seems to conclude with this issue, but we’re promised more as it… to be continued. **** (8.7 rating)