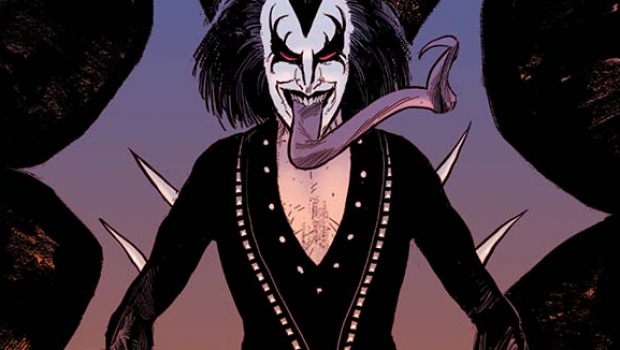 3 young KISS-fans who started a tribute band years earlier have gone their separate ways. They catch up with each other and notice how they’ve changed. This issue opens with Milo Hannah, drumming with a college band at Hillborn, California. Kimi, his old girlfriend from the tribute band texts him, she’s in town and wants to catch up. This tale is becoming complex with characters that are developing in different directions. Milo is pretty much his old self, Kimi is becoming goal oriented and anxious to develop her new career and Blackwell is obsessed with gaining power, to the point where he doesn’t care who he steps on to gain it. Chu and Burnham are doing a great job to bring us into the world of these three friends who learn a lot about themselves and the paths they’ve chosen in life. 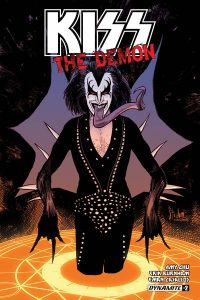 The Creative Team:
Chu and Burnham build the tension slowly in this issue. Milo is developing what he calls a benevolent virus in “The Demon.” This virus looks for weaknesses in programming then goes to work to build the defenses on its own. When he first tests it, something goes wrong and if affects different computers and causes them to malfunction. I won’t give away too much about what happens but let’s just say that it’s demon vs. demon in an interface program.
Eman Casallos continues to prove his worth and delivers a strong issue here. His imagery of the demon and ultimately demon vs. demon is impressive as he brings the hero and anti-hero to scintillating life in an epic battle for control of the internet. I really enjoy how he brings my favorite band member into this issue in an over the top way, drawing him into Hulking proportions. Great Stuff!

The Cover:
What more could any kiss fan, or Gene Simmons fan, ask for in this cover. The Demon is standing knee deep in a strange star design, for a minute it looks like a pentagram but it’s something totally different. His over exaggerated tongue is sticking out and pointing to the right. He’s in an older style, early ‘70’s type of costume and both hands are forming the “Rock on” symbol but his fingers are claw like and pointing downward. A bad ass Gene Simmons to say the least. I love this cover.

In Conclusion:
Milo winds up in trouble with the law for his un-tested computer experiment which causes damage to the internet in the town of Hillborn. His old buddy Sam Blackwell arrives to bail him out. But he and Sam don’t see eye to eye with what happened. Kimi shows up and the three find their way into a band room and start jamming Kiss tunes, namely “I Still Love You,” (great choice! It’s their best power ballad, a non-kiss fan writing this probably would have chosen “Beth” or “Forever” simply because those were the bigger chart topping songs. Kudos to the creative team for choosing this one.) It seems like the good old days until one of the three goes kinda nutzo, like (s)he is, dare I say it…demon possessed. A great issue to say the very least. The end of this one will leave the reader anticipating the next issue.