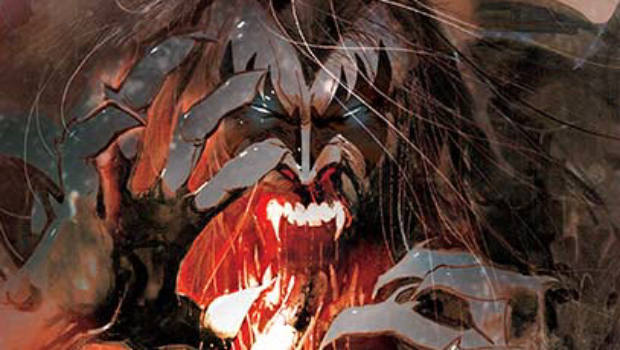 Amy Chu brings back some fond memories for me in this issue as Jay goes back to 1973 and witnesses one of Kiss’ first concerts. I remember buying Creem, Hit Parader and Circus magazines religiously back in those days and the feel for that era is perfect in this issue. But Mania’s father is getting restless. He sent them on a quest for his sword of immortality and they’re wasting his time by enjoying the show!

Amy Chu raises the stakes for Jay in this issue as he is overwhelmed by this opportunity. A kiss concert for $3 and beer for .30. He’s forgotten all about the mission he was sent on as he is savoring every minute, he spends in 1973. To complicate matters for the lord of the wasteland Mania has a taste of earth and even though it’s freezing cold and snowing, she doesn’t want to return to the wasteland. This issue is enjoyable for Kiss fans because of the flashback to the early days. (see here a History of Kiss Comics) When they were struggling and unsure of success. The supernatural elements and the specifics of Jay’s mission should keep the casual Kiss fan and comic book enthusiast reading as well. Mania’s father must introduce some troubling moments for Jay to keep him focused on the mission at hand also the specifics of Jay and Mania’s relationship should keep the reader interested. Great Stuff includes the appearance of Creem reporter Ramon Ramone and the scene where Jay and Mania get mugged in central park.

Edu Menna keeps bringing us some awesome panels. He captures the scene in New York from 1973 in an extraordinary way. The rendition of the early 1973 Kiss New York concert is enough to whet any Kiss fans appetite. Highlights include the look on Jay’s face when he realizes he’s in 1973 at a Kiss concert and the final splash where Mania’s father confronts Jay.

What a thrill ride! After Blood and Stardust, I was worried that the Kiss comic book series was going to close on a down note. After the End of the Road Tour, I needed a better Kiss comic. Thank God for Amy Chu. Not dissing Bryan Hill at all, Blood and Stardust was good, but not bringing the band to us in a personal way. Amy Chu is bringing us back to the basics from the very beginning in a way that’s shaping up to be a great lesson in life issues and helping the protagonist grow as a character. Awesome read! **** (9.2 rating)

HISTORY OF KISS COMICS by Kevin Given