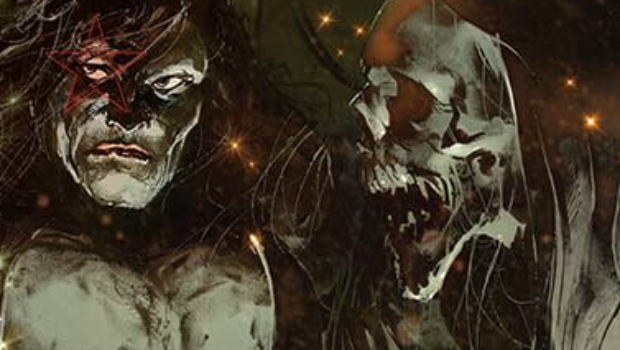 This issue opens with our heroes in concert singing Creatures of the Night. It’s 1983 in Rio De Janeiro, Brazil. Their popularity in the U.S. has waned but abroad it’s soaring, and this is clearly one of the best showings at any concert in their career. Our hero is facing his inner demon…literally and is being threatened for failing in his mission. Will he succeed? He has two more chances before it’s all over but the crying.

Chu and Loebs have Jay and Mania attend the concert, she dresses Jay in Ace Frehley makeup and they walk into Maracana Stadium while the band is singing War Machine. Dynamite is doing, well, a dynamite job in bringing closure to the ‘70’s iconic rock band which changed the face of music, and comic books, forever. This team is bringing us a tale of supernatural intrigue with a hellish demon as an antagonist. Tongues are planted firmly in cheek as this satanic creature sends Jay out once again to find the Sword of Immortality, apparently stolen by Gene Simmons. Once again, Jay is having too much fun at a Kiss concert to be concerned with his mission. I love reliving Kisstory with this writing team and they surely know that Kiss was once dubbed Knights in Satan’s Service or we wouldn’t be here today! This title is turning out to be a good send off for the band and its fans. Great stuff includes Jay’s ultimatum (even if it was slightly rushed) and Jay finding Mania on a beach in Rio De Janeiro, attempting to communicate with the natives.

Edu Menna has a good feel for this band. We are put into the time period in a realistic way and Gene, Paul, Peter and Ace, and in this issue, (though it was actually Vinnie the Ankh on this tour, slight overlook here as the lead guitar player apparently is Ace.) Eric all resemble the real band members as drawn here. The concert scenes bring back memories as they should, and It brings us a sense of déjà vu that we Kiss fans clamor for. Highlights include Jay confronting the Lord of the Wasteland and later the members of Kiss in Ace make-up.

Nostalgia and good times are felt throughout this issue and we can relate to Jay’s plight. What would we, as die-hard Kiss fans do in Jay’s place? Will he finally stop enjoying his romp through Kisstory and find the Sword of Immortality for Mania’s father? It’s great fun and an improvement over Blood and Stardust. The band is still not in it as much as I’d like them to be, but I believe this issue sets us up for that very confrontation which will happen (hopefully) in the next issue. ***1/2 (8.2 rating)