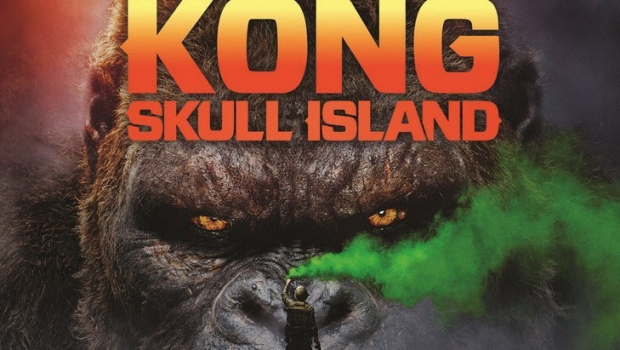 As I never saw the 33-version, the Peter Jackson reboot was close to my heart. But with KONG I get to see the origin of one of the most powerful monster myths ever with “Kong: Skull Island” coming out on disc. It became a truly compelling, original adventure telling the story of a diverse team of scientists, soldiers and adventurers who band together to explore a mythical undiscovered island in the Pacific, which is as dangerous as it is beautiful…

According to the premise:

In order to bring the film as full as possible to the ambiance of the mysterious yet fictional Skull Island, director Jordan Vogt-Roberts directed the film for six months on three different continents, namely Oahu on Hawaii, the Gold Coast of Australia and Vietnam. Some of the locations have never been featured in movies before. The truly fun thing with extra footage added to these new discs is the features on these locations. They feel too short even, to truly capture the amazing landscapes and that really is the only negative remark you will get from me. If someone decides to up the ante with these features, they will get a high 5 from me! Especially a movie like KONG… it deserves more documentaries.

The really challenging part of KONG is making sure this a new reality, a new myth is created. Surely it is based upon the mythical movies of old which is not bad at all! Plenty of reasons to take note of the fact that the Old Myth is still going strong when even publisher Starwarp Concepts made the effort to publish the “old” book for a new printing and with new art added. Shameless plug!!

The old concept of the 1933 movie or the “Beauty and the Beast” romance by Peter Jackson… they all have that special feel about it. We see this huge gorilla, this prehistoric beast battling other prehistoric beasts and we see the interaction with human and ‘civilization’.

In KONG we can see that humans are the real threat, at least. And KONG… is much more then a big gorilla. An upright position, more human features in his face… this is a new 30 foot creature. This is a new entity even, making sure the real evil will stay underground.

And although KONG is the real treat to this movie, let us not forget the actors.O come on… I do not want to talk about how good or impressive the star-cast is doing. They áre of course!

The special effects making sure this beast is hairy or wet or burning or moving… it is just stunning. It feels soooo real!

And with the Monarch Files in place, as part of the organization of humans making sure mythical creatures and events are investigated, I am sure a new Movie Universe is just around the corner!