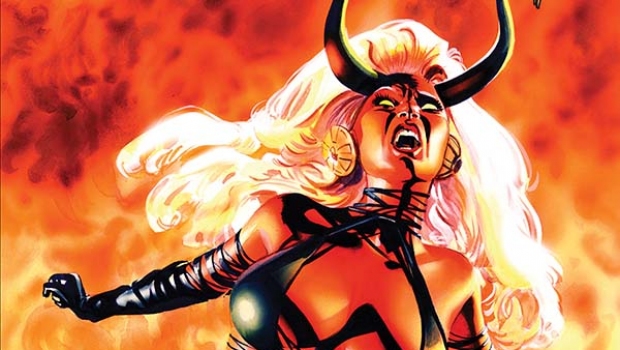 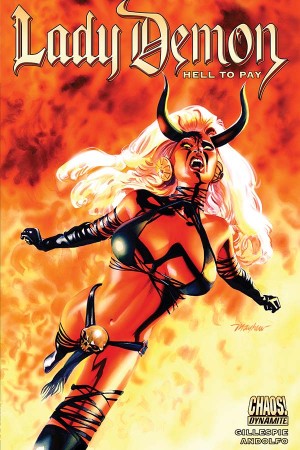 Bad girls! Do they ever truly go out of style?

Sure, they might not be as popular as they were during the height of their popularity in the 1990s (the notorious Bad Girl Era), but we’re talking comic books here—an industry that firmly believes, like its counterparts in fashion and filmmaking, that nothing is out of style forever; give it enough time, and everything eventually cycles back around.

Which brings us to Lady Demon.

She’s the “darker psyche of Lady Death” given form (according to her bio at the site Comic Vine), which would explain why she looks similar to Chaos’s most famous and popular character. Yes, I know that should be Evil Ernie, from whom Lady Death got her start, but she quickly became the “face” of Chaos Comics after her debut. That status remains unchanged—even though Dynamite doesn’t have the rights to Lady Death, poor Ernie’s been relegated to second-tier status in their rebooted universe, below vampires Chastity and Purgatori, and “darker psyche” Lady Demon. And since Lady Death is now back under the control of her co-creator, Brian Pulido, it makes even more sense that Lady Demon would have to take her place in the new Ernie-verse.

And so we have Lady Demon: Hell to Pay, written by Aaron Gillespie (Purgatori: Hell and Back, The Bionic Man), with the first three chapters illustrated by Mirka Andolfo (Chaos: Highway to Hel, DC Comics Bombshells) and the last by Juanan Ramirez (Altered States: Red Sonja, Chaos!: Smiley the Psychotic Button).

For those expecting a traditional slow buildup to the horrors that take place, be prepared to fasten your seat belt, because the story hits the ground running and never slows down; think less Guillermo del Toro’s art-housey Crimson Peaks and more Tobe Hooper’s grindhouse classic, The Texas Chain Saw Massacre. When we meet our protagonist, Violet Sparks—a Southern girl from rural Arkansas—she’s waking up to discover she and her boyfriend are already dead. And that really pisses her off—but Violet’s not as angry as Lady Demon, who’s using the girl’s body as a hiding place after a disastrous attempt to overthrow Lucifer and rule hell. Forming an alliance, the duo set out to learn why Violet was targeted, what roles her parents played in the events leading up to her death, and why Violet factors into the plans of a cult seeking the return of an elder god they worship. The body count doesn’t take long in piling up.

Artwise, Andolfo just scrapes the edge of cartoony without toppling over into the children’s-book-style realm of contemporary comics like Batgirl, Hellcat, and Squirrel Girl—her storytelling is solid, her women sexy, and her Southern good ole boys appropriately red-necky. Ramirez also does a good job, following Andolfo’s lead so their styles don’t clash and distract from the story.

My one complaint involves that awful cover art by Mike Mayhew (Star Wars, Vampirella); he’s certainly done better. If anything, the book would have been better served by using a reproduction of one of the eye-catching covers from the original miniseries—all of which are used as chapter-title pages inside the book—by Joyce Chin (Vampirella/Witchblade: The Feast, Tomb Raider/Witchblade/Magdalena/Vampirella). I get that Mayhew’s might be the more “sellable” name, but it’s definitely a missed opportunity.

Bottom line? Engaging story and art make for a fine combination, so even if you’re not a fan of bad-girl comics, but do enjoy 1970s-style horror movies, check out Lady Demon: Hell to Pay. Just make certain your seat belt’s fastened before you open the book—this bad-girl story is a high-octane ride.