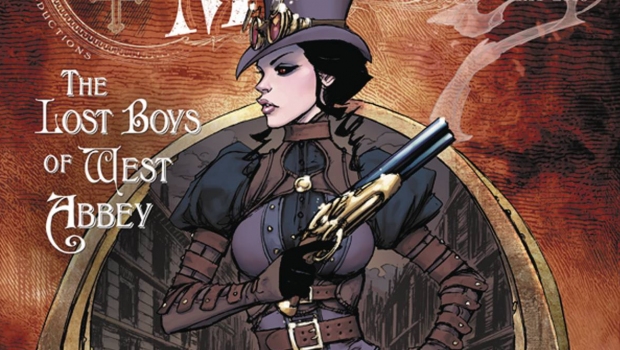 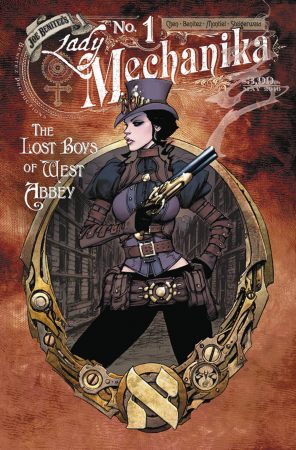 I’m not familiar with the title, saw it’s the 3rd storyline in the ongoing series, two earlier collected in trade paperbacks.
The books have been on my to buy/check list for a while actually as I really like Steampunk.
Particularly in books, without pictures. Series like The bookman history by Lavie Tidhar, Burton & Swinburne by Mark Hodder, The clockwork chronicles by Cherie Priest, Gideon Smith by David Barnett, Romulus Buckle by Richard Ellis Preston jr, Tales of the Ketty Jay by Chris Wooding, The Lotus war by Jay Kristoff (Eastern setting), The society of steam by Andrew P. Mayer and more.
In movies steampunk is kind of hard to find and in my opinion never done right. “Wild Wild West” comes to mind (so-so) and related things like Van Helsing, Golden Compass, League of Extraordinary Gentleman.
Even in games you can find some steampunk. Examples are the Alice games, the brilliant Syberia series (3rd one coming up!), Bioshock infinite, Dishonored, the very adorable Machinarium and quite a few more.

Comics with a steampunk setting are less to be found actually. Gotham by Gaslight of course, a Chris Bacchalo Steampunk title I’m unfamiliar with, the great Mr. Hero the newmatic man title from Tekno/Big in the 90’s, Warren Ellis’ Ignition City published by Avatar, a moderate list of more titles and recently Dark horse had The Steam Man which is high on my list to buy.

But all in all it’s really a niche subgenre of fantasy (retro-science fiction?) in all fields of entertainment.
So for that alone Joe Benitez and M. M. Chen get credit. Ok, easy scoring maybe when I happen to like the genre, but the genre is way different than most of the stuff out there, underutilized, so kudos for going that direction. 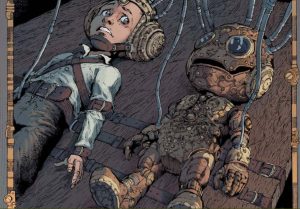 I am familiar with Benitez’ art on The Darkness and Wraithborn and bits and pieces here and there. Clearly an artist from Top cow.
On the Lady Mechanika title I think the man shines most. The style is somewhat realistic in a comic booky way (of course) with thankfully cartoony stuff too, particularly in supporting character (faces) like a band of vagabonds out for mischief, Mr. Lewis and the Pawnbroker (awesome facial hair). Speaking of that pawnbroker, the panel of him with Sing (an inspector) and Mechanika in the store shows Benitez’ strength on this title, amazing detail, little things all around that help set the mood for this title. Also somewhere in another panel there are little jars with nasty stuff in it. And not to forget the panels lined all around with cogs and pipes, these are details that really contribute to the whole.
But there’s nasty things too, a flashback with blood everywhere, giving away just why the lead character is called Mechanika (and punching out a crook somewhere showed it too) and you think teddy bears are cute? Think again, here’s a steampunk one looking not so cute. Beautifully drawn, that at least.

Then, being steampunk, there’s of course the clothing and how houses look on the interior. No steampunk without the pretty Victorian stuff. And is Benitez partly known for drawing babes, here he can go all out on the dresses they wear and giving his own twist on it with the leather bands and stuff. It all makes for very pretty eye candy, classy stuff.

As for the story by M. M. Chen: we see experiments taking place on kids like transferring the mind (I think) of one to a steampunk teddy bear, a shadowy figure conducting them, a sickly wheezing man seems to be the one he’s working for.
The vibe I’m getting from all of it is like a mean Gepetto with his dolls doing crazy things for a man who is sick and about to die, paying money to ‘Gepetto’ for eternal life or something. It will no doubt be fully cleared up in later installments.

Lady Mechanika and Mr. Lewis get on their way to investigate and find out children have been missing off the streets. Always a good one to reel you in, as you just don’t mess with kids.
Early on a detective inspector Singh shows up telling he is the official guy investigating the missing kids/murders. And I don’t know what, but there’s something with this guy, not right, guess that’s for later.
There’s more mystery, clues are found and this first issue ends on an ominous note.

I liked it. Of course the setting, clear enough, but also the setting with the experimenting on children, the whole Sherlock Holmes/Watson, here Lady Mechanika/Lewis vibe. The story and cliffhanger make me want to know more and the art is just great for it.

So, recommended reading if you like a mystery/crime story in a steampunk setting. Not familiar with steampunk is no problem, just dive in, maybe you’ll want to check out other stuff in the genre because of it.