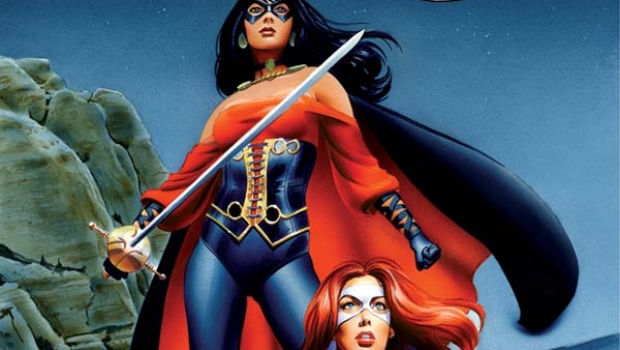 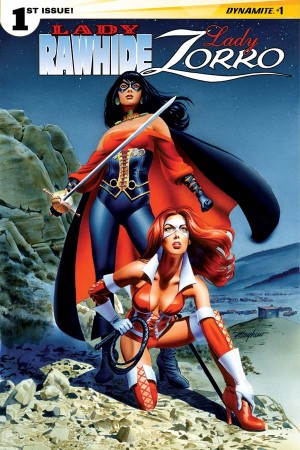 When the masked outlaw called Zorro (Spanish for “fox”) heads off for a secret humanitarian mission, he asks two of his closest friends—the corset-wearing, whip-wielding Lady Rawhide and the deadly swordswoman (not to mention slightly more conservatively attired) Lady Zorro—to keep a watch on his territory.

It’s a job they take to with great relish, as evidenced by the running battle with Spanish troops that opens Lady Rawhide/Lady Zorro #1, by writer Shannon Eric Denton (Lone Ranger Annual 2013, X-Files Annual 2014, Vampirella Halloween Special 2013) and artist Rey Villegas (Lady Rawhide, Lady Zorro, The Lone Ranger: Vindicated). It’s an action sequence that brings together two of Dynamite Entertainment’s high-profile bad girls in an adventure that shows just how lethal these ladies can be—so lethal, in fact, that they think Zorro’s a “jerk” because he won’t kill his enemies. And based on the decapitations and point-blank head shots they carry out following that declaration, it’s pretty certain Ladies Rawhide and Zorro have no qualms about taking that extra step.

Denton does a good job with the story, dropping us into the middle of the ladies’ adventure as they fill in for the absent Fox in true Zorro fashion, by making the Spanish soldiers they fight look thoroughly incompetent. After that bit of “fun” the women come to the aid of a girl fleeing her captors, which sets up the action for issue 2. If there’s one complaint I have, it’s that if you’re a new reader intrigued by the cover by Mike Mayhew (who, along with comics veteran Don McGregor, is the co-creator of Lady Rawhide), you’ll have little idea of who these women are, other than allies of Zorro’s. I’m not asking for scads of exposition to catch up new readers on past events, but it wouldn’t be a bad thing to clue them in a little. Of course, if you’re a fan of bad-girl art and you’re just there to ogle Villegas’s depictions of beautiful women meting out righteous ass-kickings to their enemies, you probably won’t even notice. 😉

Bottom line? Minor complaint aside, Lady Rawhide/Lady Zorro is a lively team-up of lethal ladies in a fast-paced adventure, complemented by great art, all of which makes for a comic sure to please fans of strong female characters and provocatively attired bad girls. 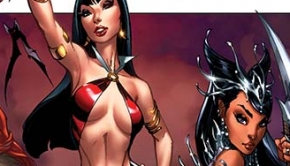