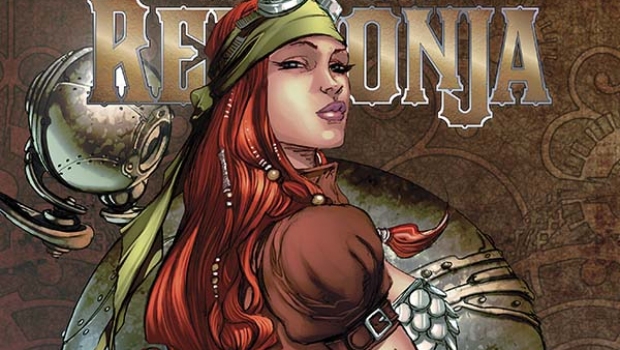 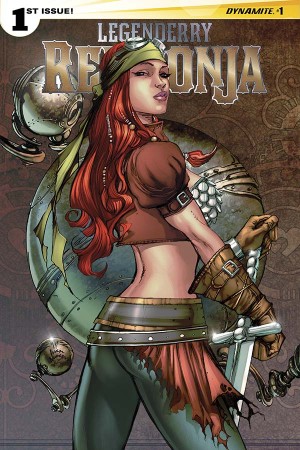 Before we get started, I’ll come right out and say it: I never read Legenderry: A Steampunk Adventure, the Dynamite Entertainment miniseries scripted by Bill Willingham that cast Vampirella, Red Sonja, the Green Hornet, the Phantom, Zorro, and Flash Gordon in a Victorian-Age sci-fi mashup. The steampunk genre just doesn’t hold any appeal for me.

But just because steampunk’s not my thing, it doesn’t mean I can’t appreciate Legenderry: Red Sonja #1, written by Marc Andreyko (Chastity, Batwoman) and illustrated by Aneke (Damsels, Steampunk Battlestar Galactica 1880). A spinoff set after the events of Willingham’s series, it finds pirate Sonja and her crew returning to the Big City (yes, that’s its name—the Big City). Is she in search of treasure and adventure? Maybe later—right now, like any sailor arriving in a port city, Sonja’s just looking for a stiff drink and an even stiffer lay.

She gets her drink, but unfortunately for Sonja, the only stiff men she encounters are a group of walking corpses pursuing an elderly gentleman named Woychek. And Sonja being Sonja (in any iteration of the character), it doesn’t take long for her to get involved in whatever nefarious plan is intended for the old man. And then matters take an even odder turn when Sonja meets an unexpected ally straight out of classic horror literature…

Story-wise, Andreyko doesn’t get too involved with the plot beyond the demands of the unseen antagonist for his ghoulish henchmen to find the elusive Woychek, but then it’s only the first issue, and Andreyko’s job here is to introduce Sonja to the story. And if you read my review of the recently concluded miniseries Red Sonja: The Black Tower, you know there’s a basic formula at play here: Sonja rides into a town, walks straight into a shitstorm, gets harassed to the point where she kicks major ass, and rides out. The only differences here are that Sonja hits town aboard a ship, not a horse, and she doesn’t get harassed but willingly steps into the shitstorm. But she does kick ass, and no doubt she’ll be sailing away from the Big City at the story’s conclusion…after a great deal more of ass-kickery, of course.

As for Andreyko’s collaborator, Aneke’s Sonja is as beautiful and playful and combat ready as any previous version of the character; in a 2014 Bleeding Cool interview, Aneke name-checked Sonja A-list artist Frank Thorne as one of her artistic influences, and you can see that in the confident attitude of Sonja’s body language. The fight scenes in this issue tend to be a little crowded at times, but that’s probably more the fault of the script taking a leisurely approach to introducing Sonja in the first half; the action doesn’t start until page 14 of a 22-page story.

Bottom line? A fast-paced story and good art make for a winning combination. Like me, you may not be a fan of steampunk, but even with the sci-fi trappings Red Sonja remains a She-Devil With a Sword, making Legenderry: Red Sonja a title you should check out.