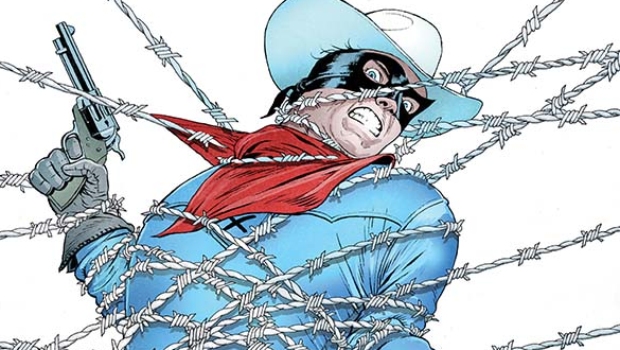 Texas: 1887, Deaf Smith County. The Ranger is caught smack dab in the middle of a land dispute amid two ranchers. He seeks the help of his old friend Tonto, but the native American may not be willing to help this time.

Mark Russell is on track to bring us a great western with this title. Yes, the land dispute between two ranchers plot has been done to death in thousands of westerns, but this time there’s more at stake than just who will gain control of the land in question. The ramifications will be felt throughout the lone star state as we look behind the scenes at some shady dealings. Great stuff includes the importance of barb wire (not Pamela Anderson) to this story and what the Lone Ranger hears while eavesdropping on some important public officials.

Bob Q brings us some great work as he successfully recreates the feel for the old 1950’s Lone Ranger TV show (the only successful transition of Fran Striker and George W. Trendle’s character to the visual medium and there’s been several tries.) and yet gives the title a modern sensibility. His characters have a gritty weather-beaten look that one would naturally develop in a dry climate such as this. Highlights include the Ranger investigation of gunshots and the first appearance of Silver (that horse is so damn smart.)

I, at first, was skeptical of a new Lone Ranger comic book, after all, are there any successful western comics on the stands today? With all the failed attempts to bring back Kemosabe to both television and movies, this is clearly a risk. But what makes this title different is that it attempts to bring back the spirit of the Clayton Moore character instead of re-interpreting said character, albeit with a more mature audience in mind. I think they get it right where the live action attempts since the original TV series always try to re-define the character, always a mistake that Hollywood seems to never get (Speed Racer, Man of Steel, etc.) Stay true to the source material and you will succeed most of the time, deviate from the source material and you will fail every time. Another great touch issue one gives us is that there seems to be some animosity between the Ranger and Tonto, which we’ve never seen in a Lone Ranger story before (at least I haven’t,) a nice touch which makes the characters more three dimensional I love the direction this issue seems to be taking and I think Dynamite has another winner on its hands. The reader is left with anticipation for what will come in issue two.