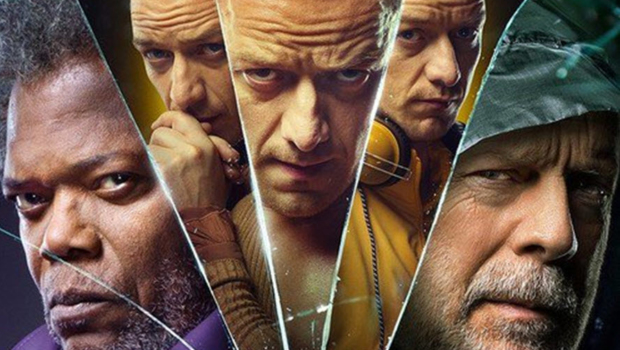 The joining of two universes that we didn’t know were related in the world of Shyamalan. Bruce Willis is back as David Dunn from the film Unbreakable. As is James McAvoy who portrays Kevin Wendell Crumb, originally in the film Split. He’s a mental patient with a multiple personality disorder. Dunn is now known of as superhero The Overseer and discovers that Crumb is holding several cheerleader’s hostage. Crumb reveals another personality known of as the Beast. Dunn discovers the whereabouts of the Cheerleaders and rescues them. However, this leads to Dunn and Crumb being committed to a mental institute, which just so happens to house one Elijah Price (Jackson.)

While committed, a psychiatrist (Paulson) attempts to convince Dunn and Crumb that they are not super heroes because there’s no such thing as superheroes.

The relationships are intricate and the scenes slightly disjointed. I can’t help but wonder if Shyamalan had this planned all along or if he just decided that because he threw Bruce Willis in to the conclusion of Split that he would devise a semi-sequel to both films. Either way he constructed a neat little flick. It’s no masterpiece but it’s entertaining enough to keep us guessing. The payoff at the end isn’t as strong as it could be, and this leads me to believe that Shyamalan probably didn’t have it planned. Bruce Willis is the best he’s been in quite some time and as a fan of Unbreakable I always hoped there’d be a couple more David Dunn films. McAvoy’s over the top antics which worked well in Split are slightly over done here. But it’s clear that he’s having fun making this film and does provide some much-needed humor. The ever-reliable Samuel L. Jackson is barely in the first half of the movie since the Elijah Price character is drugged up most of the time (or is he?) But when he finally gets to shine, he, as always, steals the show.

The film jumps around in trying to tie up loose ends from two movies it sometimes rushes through the scenes, but this is necessary to keep the film at a decent running time. It’s not as clever as it tries to be, but it does succeed more than it fails. As a comic book fan, I appreciate what Mr. Shyamalan is trying to do with this series and I’m wondering if there will be any more. Most critics on Rotten Tomatoes seem to be tired of comic book movies (except those put out by the MCU.) But for this superhero fanatic, I say let’s churn out two or three a week now! The pacing is good, the direction overall is above average (a couple of slow spots here and there.) and the movie does what it sets out to do…entertains us *** (7.8 rating.)