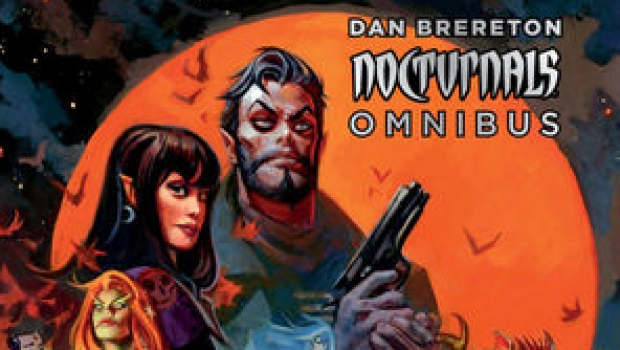 According to the Dark Horse website this book is about “The Nocturnals revolves around the mysterious quest of underworld enforcer and occult figure, Doc Horror; his supernaturally-gifted daughter Evening (aka Halloween Girl) who carries a pumpkin full of haunted toys; the Gunwitch, a silent, two-gun revenant with an itch to kill monsters; the lissome wraith Polychrome, and a host of hard-boiled inhuman players battling hidden evils lurking on the outskirts of human knowledge.” and it collects the previously published Nocturnals volumes: Black Planet, Witching Hour, Carnival of Beasts, and Troll Bridge.

Having this book in my hands I can say this collects both more and less, namely the limited first series called ‘Black Planet‘, the short story ‘Punkinheads‘, the oneshots ‘Carnival of Beasts‘, ‘Troll Bridge‘, and the short stories ‘Night of the Candy Butchers‘ and ‘Scrimshwam Crown‘ from the Hero Initiative’s Nocturnals Anniversary Art Book.

Due to this mishap on the side of the publisher, it took me a lot of doubts to come to the point of purchase, but I am glad I did. Also due to the fact that I have already a big HC-collection containing stories the publisher was mentioning, but yet again: glad I did!

I am keeping both since well.. these are totally different collections basically. And the Olympian version has a remarked, personalized and signed entry by the man himself, so….

Looking back at the first stories (BLACK PLANET) and placing it next to the later stories, you clearly see both the rawness of the series as compared to the later stories as we clearly notice how much better writer and artist (thinking about layout, pov etc) Brereton becomes, but rest assured, the Black Planet still stands tall as one of the most intriguing pulp-horror stories ever dreamed up.

It places the odd band of characters in a vibrant world, in which friendships and family are just as important elements as the supernatural, the horror, the mafia and the oozy feeling of the 50s.

The gritty and supernatural world that Dan Brereton has set out to create is beautifully painted by mostly himself and sometimes he lets other folks run wild with his characters, which time and time again have a great outcome.

The stories like ‘Night of the Candy Butchers‘ and ‘Scrimshwam Crown‘ are focussing on more single-characters stories and therefore give depth and meaning to folks like Starfish and Halloween Girl in adorable, and loveable fashion.

This collection is a MUST HAVE in every collection that calls himself a comic fan! Forget about the latest DC or Marvel event… this is the one that truly stands the test of times!!

Dan Brereton is gearing up with April Solicitations: Nocturnals and Thrillkiller →