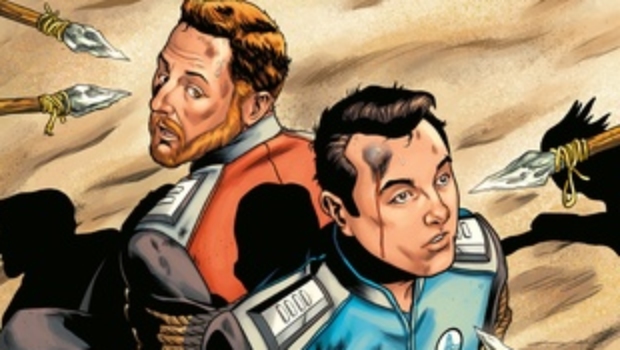 “The penguins shot us down?” – Gordon.

While en route to a conference, Ed and Gordon find a space Buoy that delivers a distress signal from an old Union Warship. They take a shuttle to investigate and are shot down. After crash landing, they discover an alien race called the Chog. They live near the old warship which apparently shot them down.

David A. Goodman completes this simple tale of seeking out new life and new civilizations in true Star Trek spirit. The Chog are an interesting alien life. They seem peaceful and incapable of firing the ancient ships weaponry. So, who shot down the shuttlecraft? I enjoyed this story for its simplicity and for making me feel like I’m watching a Star Trek episode unfold. It’s not an epic tale to be sure, but it is fun to see our heroes react to the truth about the Chog and the warship. Great stuff includes watching Gordon order his food and Captain Mercer discovering who fired on their shuttle.

David Cabeza continues to amaze us with his spot-on renditions of the Orville’s cast and crew. The art is easy on the eyes and works perfectly in the scope of this tale highlights include the opening splash where our heroes investigate the downed ship and the attack on the Orville.

Dark Horse begins their run of Orville comics with an amusing tale of how a primitive alien culture assimilated ancient earth technology and how our heroes detect what happened between the first contact with this alien race and their modern way of doing things. A satisfactory beginning to a comic series that will hopefully last a long time *** (8.7)