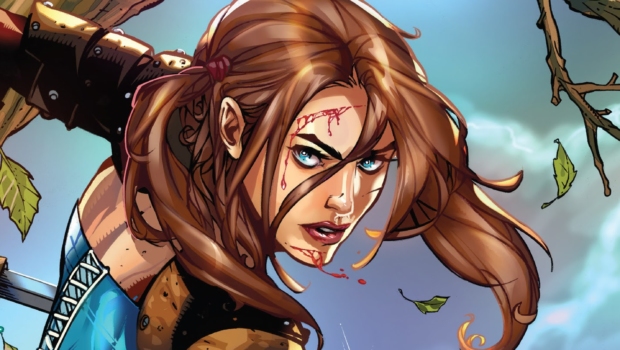 This is it, the final battle between Dorothy and the gathered forces of good against the Wizard and the forces of darkness for the heart (literally) of OZ.

This is what the story has been building up to: the final battle for control of OZ. The wizard and his army have uncovered Ozma, the Heart of OZ and plan to use her power for total control. Dorothy and her ragtag group of fighters unite the remaining parts of OZ and bring the fight straight to the Wizard in The Emerald City and with allies both new and old (even those thought lost forever) on both sides they wage war.

We know how it’s going to end, good triumphs over evil, heroes on both sides fall in battle and at the nd of the day we get our happily ever after…or do we? The Wizard has a dire warning for Dorothy: if she strikes him down she’ll leave OZ open for something, someone, worse than him. To bring freedom to the land Dorothy has to do what needs to be done to bring healing to the realm. We get our happy ending. We get our moments of renewal. Moments of mourning. And of joy…

And just as the Wizard warned we get our threat of something worse.

Who is it? I don’t know but I’m looking forward to the next seires to see what makes this person an even worse threat than what our heroes have already faced in the past.

I’ve enjoyed these. I normally read the series that take place on Earth and not in the Realms but this series has been fun. With the continuing theme of friendship (gained and lost) and sacrifice and the cost of your actions (whether thru the use of magic or choices made) adding to the feel of the story.

The art is, as with virtually all of Zenescopes books now, just solid. The ‘house style’ gives not just the mini series’ but the entire Grimm Fairy Tales universe a cohesive feel. Just beautiful work.

The colors are great and just take already strong line work and giving it just that much more of a push.

And the lettering holds everything together. I always pay attention to the lettering, something it seems a lot of people don’t pay much notice too. BUT a bad job can really hurt the book and a great job can just add a depth to the story. This adds that depth with the use of differing bubbles and speech boxes giving a clear difference between thoughts/narration looking back at whats happening and the regular speaking.