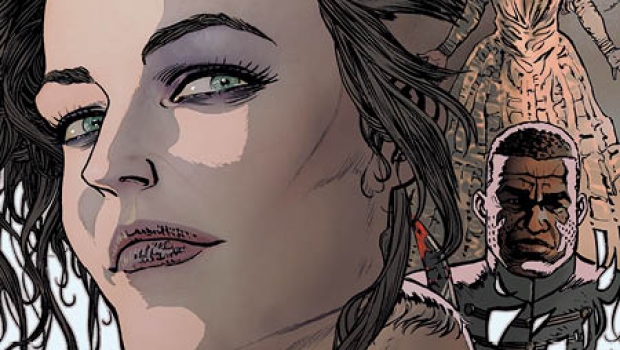 “When you are marked by this creature there is only death, a walking death or a somnolent obeisance.” – Van Helsing.

So far in Penny Dreadful, Sir Malcolm has sent Vanessa to find his long lost daughter, Mina. Vanessa accepts this mission because Mina is her friend. she has to wonder, though, how does Sir Malcolm believe in the demimonde? This issue opens on the shores of Tanganyika, Africa. Sembene has come across Sir Malcolm who is looking over the dead body of his son, Peter. When Malcolm suggests they bury him, Sembene says that his son shouldn’t be buried there. Sembene believes that the boy should be buried at home and that if he’s buried at this location it will result in a curse. Sure enough, after Peter’s body is buried a lot of Sembene’s people become sick, but Malcolm does not believe the sickness is the result of a curse. 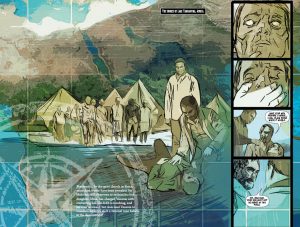 The Writers open this issue in a gloomy tone. the mission they go on is foreboding and Sembene’s threat of a curse seems to be true as obstacle after obstacle seems to prevent them from achieving their goal. Brilliant writing exposes the mind and attitude of Sembene as Sir Malcolm questions why he goes on this mission and how he can sell men as slaves. His response is cold and calculating as we see what drives this finely conceived character. The writers also lead us deep into the soul of Sir Malcolm as we see him wrestle with the death of his son and his own hidden demons. After burying his son in a place that he was warned not to, Malcolm seems to see Peter at every turn. is he hallucinating? Is this the result of the curse or his own longing to see his son again? These writers are good at keeping the reader guessing on every page.

DeMartini gives more superb renderings and creates a dream like ambience with each panel. His style is clearly not for everyone but it works for this title incredibly well. When Sir Malcolm sees his dead son and follows him it is hard to tell the reality from the fantasy as we follow along and wonder ourselves exactly what it is we are looking at. The way the lion attack is drawn is especially intense as we don’t realize if it’s real or part of Sir Malcolm’s nightmare until it’s over. The solution is gut wrenching as Malcolm realizes the reality of what he’s done. Writers and artist work astonishingly well together.

This cover is an interesting look at the characters through Vanesa’s mind. She’s in close up, head tilted to one side but glancing with her eyes turned to the reader. other characters are to her side Mina is in the far background on a city street with her arms open and her palms facing front. Sembene is underneath her looking forward with a cold, stony look on his face and below him is Sir Malcolm. His thumb and forefinger are resting on his chin and his lookin off to the side, he appears to be in deep thought, contemplating what’s happened. Well done, we see the characters moods as reflected in this issue.

With the death of Peter we see the bond grow between Sembene and Sir Malcolm. Their friendship strengthens as Sembene stays by his side through thick and thin. He didn’t have to follow Malcolm after the belief that his actions caused this expedition to be cursed, but he does. Sir Malcolm seems to be going delirious as he continues his expedition so soon after his sons death and Sembene helps him through the delirium and even saves his life before this issue is over. Most comics keep the action turned up and the character development to a minimum, but Penny Dreadful is the thinking man’s comic book and this issue is mostly about character development, keeping the action reduced to a couple of pages. The story is proceeding nicely and I can’t wait for the next issue.