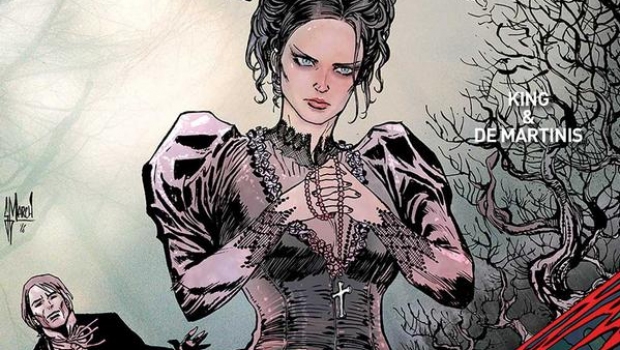 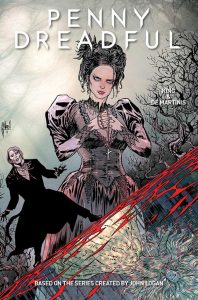 It has been revealed to Vanessa and Sir Malcolm that Mina has been abducted and they realize now that they are seeking a creature with untold powers. They now turn their attention to a man who has lost all hope but may provide the key to finding their friend. The “master’s” control over Mina is manifest in this issue like no issue before this one and her friends might be too late to save her.

The Writers have gone all out in this issue. I love how they find Mina but she isn’t the Mina they expected to find. She is not herself as Dracula has taken complete control of his prey. The tension rises as we discover that Mina isn’t the only one that got bit by this monster. Who else has been bitten? How do they find this out? And what will happen next?

Louie De Martinis has grown so comfortable with these characters that he displays a natural feel to the people and background. His pencils only attitude is still effective in creating that dream like atmosphere to the proceedings. I love how they barely seem to come out of the shadows and always seem to be in a fog like state, very effective for a horror/mystery comic.

I am very fond of this cover. We have Mina in the foreground holding a rosary and looking at her reflection in a body of water. But instead of her reflection we see the reflection of another woman. Johnathan is in front of her, though miniaturized, as if his stature doesn’t warrant the same level of importance. There is a stream of red, presumably blood, flowing down hill in front of her, separating her from the image she sees, almost like they’re in two different dimensions.

I rather enjoyed this tale. We see how Mina’s friends are willing to sacrifice themselves to try and bring her back to the Mina she once was. Other characters fall under the same influence as Mina and are trying to break free of the spell. Malcolm gets nervous and afraid which leads him to become trigger happy. The tension mounts as we race to the conclusion of this fine story.

After the story reaches its satisfying conclusion we are promised that Penny Dreadful will return.